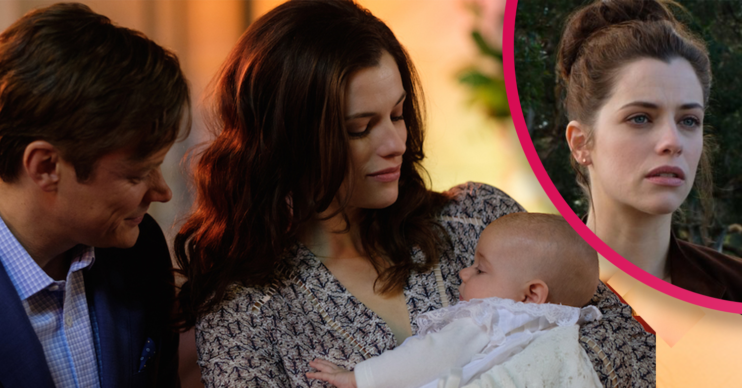 Who is the father of Meghan’s baby in The Secrets She Keeps?

Aggie isn't the only one with a secret

The Secrets She Keeps is jam-packed with twists and turns.

While it’s clear from the start that Aggie (Laura Carmichael) has a few skeletons in her closet, Meghan is no angel either.

So who is the father of Meghan’s baby?

Who is the father of Meghan’s baby in The Secrets She Keeps?

In episode two of The Secrets She Keeps, Meghan (Jessica De Gouw) reveals she cheated on Jack (Michael Dorman).

Making matters worse, the man she slept with is her husband’s best friend, Simon (Ryan Corr).

Read more: The Secrets She Keeps is based on a disturbing true story that shocked Britain

Although she insists they only had sex once, he is convinced the unborn child may be his.

Now, he’s demanding a paternity test to prove it.

Adding more smoke to the fire, Jack reveals he only had sex once with Meghan before she fell pregnant.

This means that both men have a 50:50 chance of being the biological father.

Revealing what it was like on set shooting such intense scenes, Ryan told Hachette Australia Books: “Jess De Gouw is a brilliant actress.

“With stories like this and with characters like you really need to trust each other. You need to be able to find and navigate that space together.

“From the first day on set, we really had to jump off the deep end, but when you looked up, s he was there, was available and you can ride it together.”

Who is the father in The Secrets She Keeps book?

The Secrets She Keeps is based on Michael Robotham’s book of the same name.

In his novel, we never learn who the real farmer is.

Simon takes a DNA sample in the penultimate chapter and sends it off for testing.

However, the result is left to the reader’s imagination.

Of course, the BBC series could have a very different ending.

Is The Secrets She Keeps BBC series the same as the book?

Robotham’s book was adapted for the small screen by producers Helen Bowden and Paul Watters.

During an interview with Drama Quarterly, Helen hinted that the series doesn’t stray too far from Robotham’s original words.

She said: “Honestly, it didn’t take a huge amount of work to conceive Secrets as a drama series. The book is superbly plotted.

“Once you start reading, you really can’t put it down; and it’s complex, so the six episodes just seemed to fall out of the pages.

“The characters, particularly Agatha, are also deeply compelling. I’ve done lots of adaptations and this one lent itself to the process very easily.”

The search for baby Ben steps up a gear in the penultimate episode of The Secrets She Keeps.

Meghan tries to keep her composure as she appears on TV and makes a public appeal.

But once the cameras stop rolling she breaks down as she starts losing hope of ever finding her son alive.

Meanwhile, Aggie is at home watching under the close eye of an increasingly suspicious Hayden.

And it isn’t long before the police come knocking at their door.

Is it finally game over for Aggie?