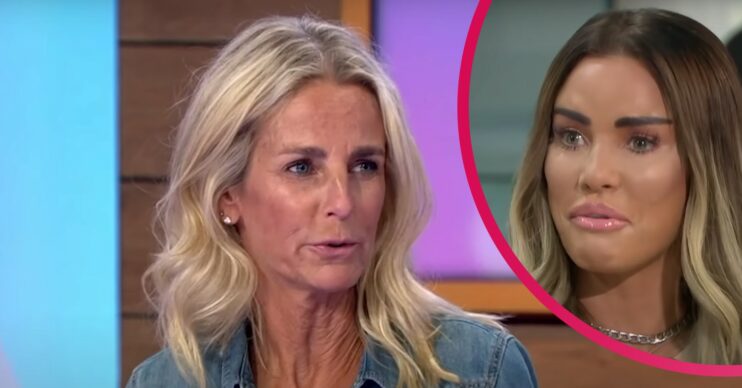 Sun-worshipping Ulrika Jonsson looked like she didn’t have a care in the world as she shared bikini pics on Instagram.

The TV personality, 53, was slammed by Katie Price following Ulrika’s comments about the ex glamour model’s approach to cosmetic surgery.

But Ulrika appeared unmoved as she posted images of her stripped down to her skimpies earlier today (Sunday July 18).

It seems Ulrika was keen to slap on the sun tan lotion and soak up the rays early doors.

Read more: Katie Price fires back at ‘haggard’ Ulrika Jonsson after being branded ‘fame-hungry’ over surgery

Avoiding comment on the spat with Katie Price, Ulrika drew attention to how keen she was to enjoy the hot weather.

“… Already,” she captioned the selfie as the sun beamed on her face and top of her chest.

The other photo shared by Ulrika showed her laying down, with her golden locks spread out.

Placing a forefinger on her lips as if in contemplation, she also posted a cryptic remark referring to parts of her body.

Maybe you need to take a leaf out of my book as you look haggard my darling.

What was Katie Price reacting to?

Katie had used Instagram Stories herself to have a pop at Ulrika and warn her off from judging her.

Uploading a pic of Ulrika’s face, Katie blasted her: “@UlrikaJonssonOfficial before judging and having a swipe at me take a look at yourself and your career. Maybe you need to take a leaf out of my book as you look haggard my darling.”

Read more: Ulrika Jonsson defies her age – and her critics – as she poses in bright orange bikini

Katie’s comments were seemingly motivated by Ulrika claiming in The Sun that Katie is “fame-hungry”.

She said she was “horrified” by Katie’s recent ops.

Ulrika wrote: “She has, once again, exhibited and paraded publicly her latest plastic surgery, and I can’t deny I am quite horrified by the images. As a mum, I also wonder what her children must feel.”

She also indicated on how Katie has changed over the years.

Ulrika reflected on a claimed difference between Katie now and the woman she met in the 1990s: “This girl wasn’t fame-hungry, she was starving, and she carved out a huge career for herself.

“As a bystander, it has always felt to me as if she’s constantly in pursuit of something.”