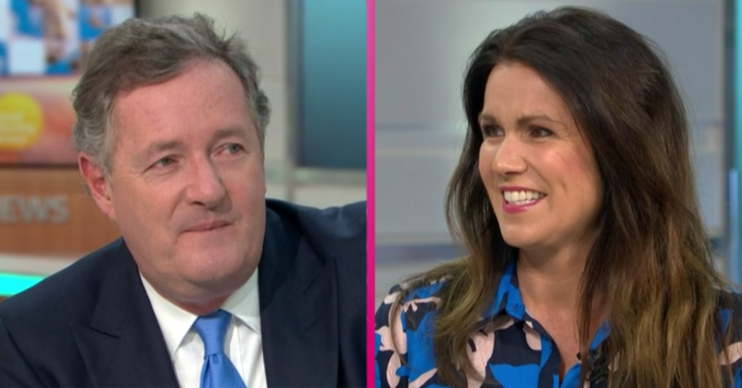 'The time has come!'

The GMB star has signed up for the latest series of Celebrity Gogglebox on Channel 4.

And rather than take part with Piers, she decided to team up with her pal Judge Rinder.

Confirming the news on GMB, she said: “The time has come frankly to replace Piers.

“My new TV sidekick is Rob Rinder has allowed me onto his sofa and joins us after 8 O’Clock to talk about our Celebrity Gogglebox debut.

Opening up about filming the series, she added: “It is great fun and Judge Rinder is great fun – you just have to watch TV for hours and hours.”

A preview of Susanna taking part in the show was then aired, revealing Susanna in a leopard print top, which she described as her Bette Lynch outfit.

The presenter could be seen in the preview holding her hand up to cover whatever show she watching.

Explaining what was going on in the preview, Susanna said: “I was doing that while we were watching television with Rob Rinder not because they were playing Good Morning Britain!

“I don’t think I’m the only one that does that when they see something on the screen they don’t want to see.

“It’s like when you used to seethe Daleks on Doctor Who and you used to cover up your face. I just do that.

“If you see something awkward on screen, that’s the way to get rid of it. Try it at home with one side of the screen!”

Jokes aside, the GMB host admitted she was feeling slightly anxious about her Gogglebox debut.

“The benefit of doing a live programme is that your’e always in control of what you say and what gos out,” she continued.

“Well, you hope to be anyway – you’re not necessarily in control of what other people say.

“But when you do a recorded programme, it’s all in the hands of the editors.”

Piers then threw shade at Celebrity Gogglebox for its recent editing of his pal Eamonn Holmes.

“They can be a bit savage with the editing process,” he commented.

“They had to apologise to him [to Eamonn], quite rightly – but it is a good show. It’s fun to watch.”