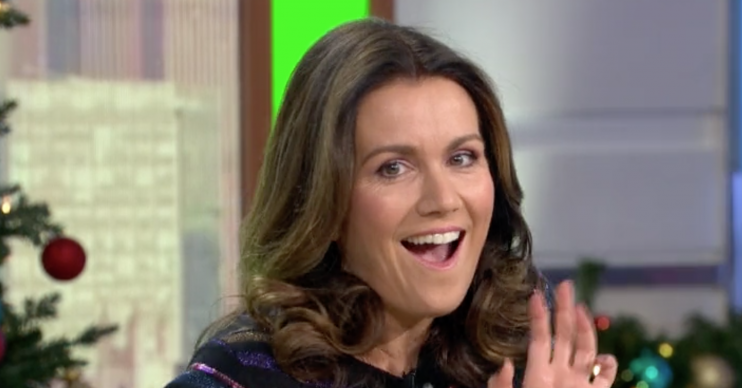 And he is not impressed!

The show opened with Piers, Richard Arnold and Charlotte Hawkings all wishing Susanna a happy birthday.

They sang to Stevie Wonder’s Happy Birthday as a birthday message popped up on the screen behind the famous GMB desk.

Then it was time for the gifts – and they all seemed to have a very common theme.

Read more: Princess Charlotte reveals a pony is at the top of her Christmas wish list

Charlotte was first up, giving Susanna a box to open.

She said: “There’s something that might come in useful… Silence is golden.”

Susanna opened the gift, which featured a Mute Piers button, with her co-host not exactly loving being the butt of the joke.

Susanna then revealed that Piers had actually bought her a really nice gift, a trip to a spa, where he said she can have “anything” she wants.

There’s something that might come in useful… Silence is golden.

The birthday girl said: “He has got me a couple of days off to relax. He’s sending me to a beautiful spa and apparently I can have anything I want, so I will be having the full works.”

The gifts didn’t stop there, though, as Richard Arnold handed over a bag of presents from the GMB crew.

Inside the bag was some earplugs and a pair of ear defenders, both designed to block out Piers.

The day before her birthday, Susanna caused a stir with viewers when she wore a plunging berry red dress.

Head to our Facebook page @EntertainmentDailyFix to wish Susanna a happy birthday.