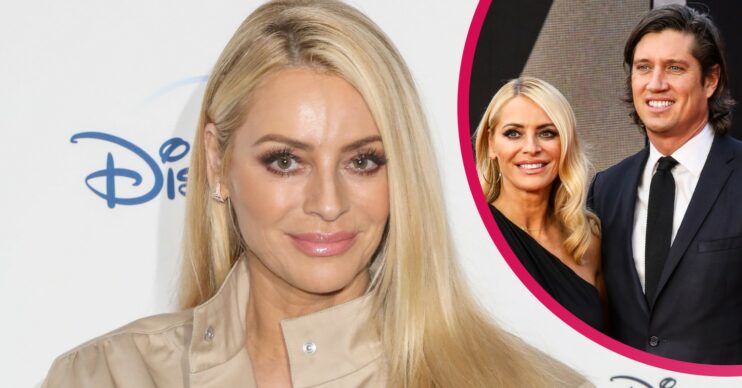 Tess Daly has given fans a glimpse into her family break with husband Vernon Kay and their two daughters.

The Strictly Come Dancing host, 52, took to social media to share a series of photographs from a trip to Dorset.

Tess and her family recently marked the New Year on the beautiful coast.

Taking to Instagram today (January 4), Tess shared a selfie of herself as she wrapped from the wind.

A second shot showed the star and her presenter husband Vernon.

Meanwhile, a third was taken as their daughters, Phoebe and Amber, enjoyed the beach.

Alongside the post, Tess penned: “A little family trip to the beach was the perfect start to 2022. Although the wind had other ideas about my hair.”

Vernon, 47, also documented the trip with a series of snaps on his profile.

“Wrapped up warm (again!) this time beach stroll down in Dorset,” he captioned the photos.

“Stunning scenes on the beach. Studland bay was used as part of the rehearsal for DDay. Fort Henry was a look out over the bay. You can tell I have a fave hat and jacket combo!!”

Fans rushed to comment on the photo, with many complimenting Tess’ natural beauty.

One wrote: “Lovely photo. So natural.”

Another gushed: “Breath of fresh air.”

Another commented: “Beautiful couple, inside & out. Hope you enjoy the break.”

It comes after a busy few months for Tess and Vernon.

Vernon recently hosted This Morning after taking over from Holly Willoughby and Phillip Schofield before Christmas.

Meanwhile, Tess was busier than ever alongside Claudia Winkleman on Strictly.

During the series, Vernon rushed to his wife’s defence over her rumoured feud with co-star Craig Revel Horwood.

“We always support him in panto. He’s a friend.”

He also weighed in on Tess’ outfit choice after viewers mocked her during the finale.