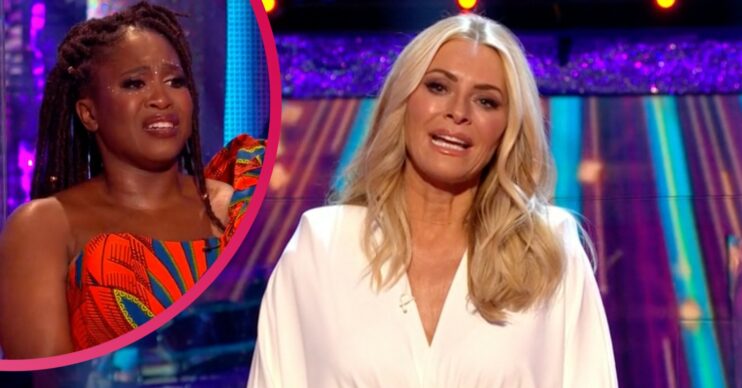 The presenter was accused of using a 'baby voice'

Tess Daly has been slated by Strictly viewers after lapsing into her “baby voice” during the show’s glittering final.

The presenter was in hot water with fans earlier in the series, when some claimed she spoke to Rhys Stephenson in a “condescending” way.

Then during Saturday night’s final some people felt she was “patronising” when Motsi Mabuse was moved after watching finalists John Whaite and Johannes Radebe dance.

Viewers picked up on Tess’ behaviour on the show last night (December 18).

“Darling I’ve seen you dabbing your eye… awww,” Tess said to Motsi before asking if she was “overwhelmed”.

Following the moment, viewers rushed to social media to comment.

“Tess, stop talking to everyone like they are 3 years old,” said another, adding an angry emoji.

Another tweeted: “Oh (bleep) Tess with your, ‘Awwww, are you crying?’ Like you’re taking to a (bleep) 3 year old who’s bumped their head.”

Tess is so cringe! #Strictly

Why are people so mean to Tess? She looks gorgeous every week and presents brilliantly with Claudia! #Strictly

“Stop being so bloody patronising Tess,” said another.

Meanwhile, another picked up on a comment to Anton Du Beke.

One posted: “Anton best be returning as a judge in 2022. But Tess can be left behind. I just can’t cope with her pointless cringe comments. #strictly.”

But another defended the star, saying: “Why are people so mean to Tess? She looks gorgeous every week and presents brilliantly with Claudia! #Strictly.”

Tess was accused of speaking to Rhys ‘like a child’

The star came under fire from viewers earlier this month for her comments to Rhys when he faced the dance-off against John.

As it was announced that Rhys would be facing the dreaded dance-off, Tess told him: “Aw I’m so sorry darling.

“I know this is not the position you wanted to find yourselves in.”

At the time, viewers accused the star of speaking to Rhys “like a child”.

One person said on Twitter: “Rhys is 28 years old. Why does Tess speak to him as if he’s about 14? I like Tess but really, patronising much?”

Another wrote: “Wish Tess wasn’t so patronising to Rhys! She talks to him like he’s five years old!”

EastEnders actress Rose Ayling-Ellis and her partner lifted the coveted Glitterball trophy during Saturday night’s final, after seeing off competition from John and Johannes.

Presenter AJ Odudu was also supposed to be competing in the final, but had to pull out after injuring her ankle.