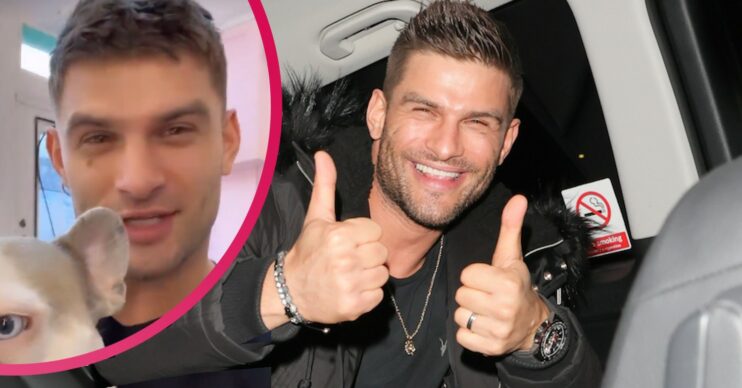 Aljaz was in good spirits as he showcased his new hair

Aljaz, who is married to It Takes Two presenter Janette Manrara, debuted his new look on Instagram.

Taking to his Instagram stories, the dancer shared ‘before’ and ‘after’ videos of his barnet.

What has Aljaz done before the Strictly Come Dancing tour?

A masked and wet-haired Aljaz told his followers: “Before Scott does his magic! Guess where I am? Kitch hair.”

Later, he shared another clip showing off his chopped locks, with salon dog, Gaston.

Aljaz, who will dance with Sara Davies again on tour, jokingly claimed that the French bulldog finished the haircut.

He said: “This is after. Gaston, you did an amazing job.

“Scott started the haircut and Gaston finished it. I’m really pleased, thank you so much.”

Aljaz then gave Gaston a little kiss on one of his ears before laughing and saying the pooch was sleepy.

When does the Strictly Live Tour start?

The Strictly Live Tour is set to kick off next Thursday (January 20) in Birmingham.

Some of the biggest names from the series, including 2021 champs Giovanni Pernice and Rose Ayling-Ellis, will perform 33 shows around the country.

The tour will stretch out over January and February with multiple dates in Birmingham, Leeds, Newcastle, Manchester, Sheffield, Liverpool, Nottingham and London.

As well as stars from the 2021 series, other big names will be joining the line-up.

The Wanted singer, Max George, who competed in 2020 will be showing off his moves again with Katya Jones.

Ex-EastEnders star Maisie Smith will be dancing with Kai Widdrington after AJ Odudu’s ankle injury forced her to pull out.

Rose, who made history by being the show’s first ever deaf contestant, said of the upcoming tour: “I have loved every minute of my Strictly journey so far, so to be able to continue it on the live tour is so exciting.

“I can’t wait to perform live in front of all the fans who have supported me through this incredible series.”

Runners up, John Whaite and Johannes Radebe, will also be taking part.

The pair made history too by being the first all-male couple to compete in the BBC One dancing competition.

Why is Dan Walker not on tour?

With his tongue firmly in cheek, Dan commented on Kai’s Instagram post, in which he confirmed that he would be dancing with 2020 Strictly star, Maisie.

Dan commented on Kai’s picture of himself and Maisie and suggested that he should’ve been picked to fill AJ’s place instead.

Kai said: “I’m really gutted to hear that @ajodudu won’t be able to join me on the BBC Strictly Tour around the UK.

“I know we were both really focused and willing to get back on the floor in the arenas and finish what we started.

Dan then askeD: “Errr… where was the call? #KaiAndDansShowdance could have been incredible.”

Head to our Facebook page EntertainmentDailyFix and tell us if you’re going to the Strictly tour.