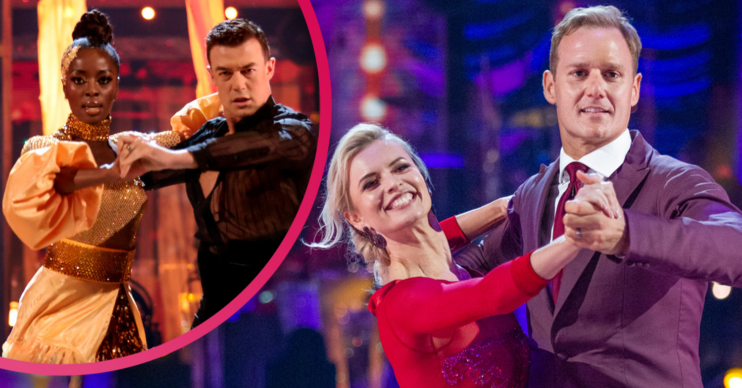 BBC Breakfast star Dan Walker has reacted to news that AJ Odudu has pulled out of the Strictly Come Dancing live tour.

And, far from sending his love to the stricken star, he’s asked her professional partner Kai Widdrington why he wasn’t invited to take her place.

With his tongue firmly in cheek, Dan commented on Kai’s Instagram post, in which he confirmed that he would be dancing with 2020 Strictly star Maisie Smith.

What did Dan Walker say about the Strictly tour?

Dan commented on Kai’s picture of himself and Maisie. And suggested that he should’ve been picked to fill AJ’s place instead.

Kai said: “I’m really gutted to hear that @ajodudu won’t be able to join me on the BBC Strictly Tour around the UK.

“I know we were both really focused and willing to get back on the floor in the arenas and finish what we started.

While other Strictly stars were quick to welcome Maisie to the gang, Dan asked: “Errr… where was the call?”

He then revealed exactly what he had in mind for his performance with Kai.

“#KaiAndDansShowdance could have been incredible 😢,” he joked.

How did Strictly fans react?

They were very much up for the partnership.

“People would pay a lot to see that spectacle 😜🤩,” laughed one fan.

“Ahhh yes this so has to happen,” said another.

“Now that would be funny to see 😂 right height anyway,” said a third.

A fourth begged: “@mrdanwalker omg please please make this happen in February at the O2. It will make my year.”

Who is on the tour?

Max George has also joined the line up too – he will dance with Katya Jones.

Janette Manrara hosts the show. Meanwhile, Shirley Ballas and Craig Revel Horwood will be joined on the judging bench by Bruno Tonioli.

Head to our Facebook page EntertainmentDailyFix and tell us if you’d have liked to have seen Dan on the Strictly tour.