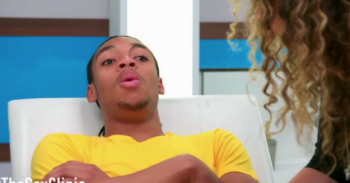 Warning: This is seriously gross

Apologies in advance to anyone who loves custard, because you might want to avoid it for the rest of your life after hearing about lifeguard Liam.

Admitting he rarely uses a condom, Liam told Dr Naomi Sutton that a discoloured liquid of a “custard consistency” had been oozing out his penis.

He said: “There was something, when I went to pee, there was a blotch of yellow goo.”

The professional then examined him and noticed small lumps on his genitals, which he admitted he thought were skin tags.

However, Dr Naomi quickly put him right, pointing out that they were in fact genital warts which Liam would have to have blasted off with liquid nitrogen.

And viewers at home were quick to express their horror at the diagnosis.

One said: “Don’t understand why you’d go on Sex Clinic and announce to the world you have yellow spunk.”

While another said: “Go on national television get your [bleep] out and diagnosed with genital warts. TF is this Sex Clinic programme?”

A third typed: “Watching The Sex Clinic guy on it, cocky as hell, turns out his dirty bits has genital warts.”

Several others announced they would never be able to eat custard again.

Other unusual patients on The Sex Clinic have included a man who doesn’t wear condoms because “his penis is scared of them”, and one who hadn’t washed under his foreskin for 24 years…

Earlier this year, patient Nunu – no, we’re not joking – complained of a “fishy smell” and admitted she often forgets to wash her vagina, while Ayo had to call his mum to check how many testicles he had…

Would you go on TV to discuss your health? Leave us a comment on our Facebook page @EntertainmentDailyFix and let us know what you think!