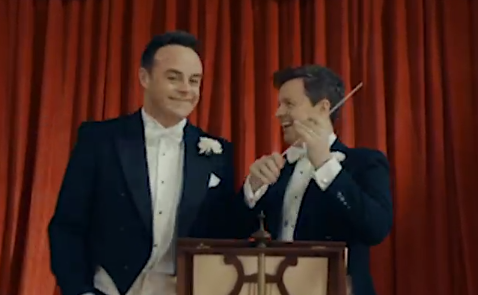 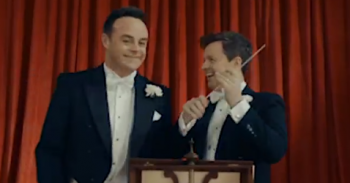 Ant McPartlin will be back on our screens next month and Britain’s Got Talent has teased his return with a spectacular new trailer.

He features alongside all the show’s regulars, including co-host Declan Donnelly and judges Simon Cowell, Amanda Holden, David Walliams and Alesha Dixon.

Before Ant is introduced near the beginning of the promo, Dec can be seen standing alone at a podium and conducting a chaotic orchestra of BGT acts.

The baton flies out of his hand and when he stoops to pick it up, Ant arrives to help him out and take his place at the podium.

United, they continue to conduct the orchestra in perfect harmony.

Elsewhere, Amanda is seen sawing a person in half as part of a magic act, while David dazzles in a white top hat and suit as he maniacally crashes a pair of cymbals.

Alesha, meanwhile, lifts a cloche to reveal a red buzzer, which she then presses.

At the end of the trailer, boss Simon suddenly appears and presses a golden buzzer that releases a cloud of confetti.

Dec is no doubt excited to have his best pal back with him on the show, having hosted last year’s live shows on his own.

Ant ended up pulling out of series 12 after being caught up in a drink-driving scandal.

He took a year away from the spotlight to focus on getting his life back on track.

You can watch the trailer here.

Ant credited a big part of his recovery to his girlfriend Anne-Marie Corbett.

In a conversation with The Sun, he said: “Anne-Marie honestly is the fundamental reason for the great change in my life.”

– Britain’s Got Talent will return to ITV in April.

Did you miss Ant in the last series of BGT? Leave us a comment on our Facebook page @EntertainmentDailyFix and let us know what you think.