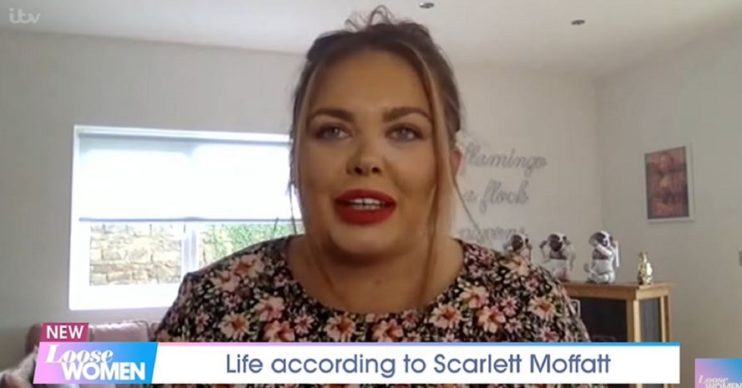 She also questioned the moon landings

Reality TV star Scarlett Moffatt has revealed her belief she was once abducted during an alien encounter in a bizarre interview on Loose Women.

Speaking on the show today, the former Gogglebox star, 29, told the panel she thinks she was once visited by extra terrestrials at her home in County Durham.

What did Scarlett say?

She said on the programme: “My boyfriend Scott [Dobinson] thinks that it’s a load of rubbish, because I said when I was about ten, a massive beam of light went into my bedroom window and then I had a dream.

Read more: The British Tribe Next Door ‘returning without Scarlett Moffatt’ after backlash

“I think they wanted me to think it was a dream that I had been visited by aliens. But Scott seems to think that it was just a car headlight.”

Elsewhere in the interview, Scarlett also expressed her believe that America’s early moon landings were faked.

She told Loose Women stars Andrea Mclean, Nadia Sawalha, Gloria Hunniford and Brenda Edwards: “People say, ‘I believe that we landed on the Moon’. But then they find it really far fetched that there can’t be other planets where little men haven’t travelled to ours.”

A massive beam of light went into my bedroom window.

She also left them open mouthed by backing another conspiracy theory. Scarlett believes that the Beatles star Paul McCartney we know today isn’t the real one – and that the original Paul was replaced by a lookalike.

Viewers reacted on Twitter with disbelief, as one said: “Scarlett Moffatt was abducted by aliens as a child? Sure… #LooseWomen.”

A third put: “So Scarlett Moffatt claims she’s been abducted by aliens. The lengths some of these ‘celebrities’ will go to to get their faces in front of the camera.”

Someone else replied: “She is bonkers!”

Scarlett Moffatt was abducted by aliens as a child? Sure… 🙄 #LooseWomen

Scarlett and Scott have a new BBC podcast. Their show, Scarlett Moffatt Wants To Believe, launches today (Monday, May 11). It involves her trying to convince her boyfriend about unlikely sounding events.

The former I’m A Celebrity: Extra Camp presenter delighted fans earlier this month when she revealed her new project.

In a chat with The Sun newspaper’s Bizarre TV column, she said: “I’m obsessed with conspiracies.

“I’m in my element on this podcast as we cover everything from aliens to the Illuminati to mermaids.

“My boyfriend Scott is a non-believer so there’s some fun arguments – sorry, debates.”