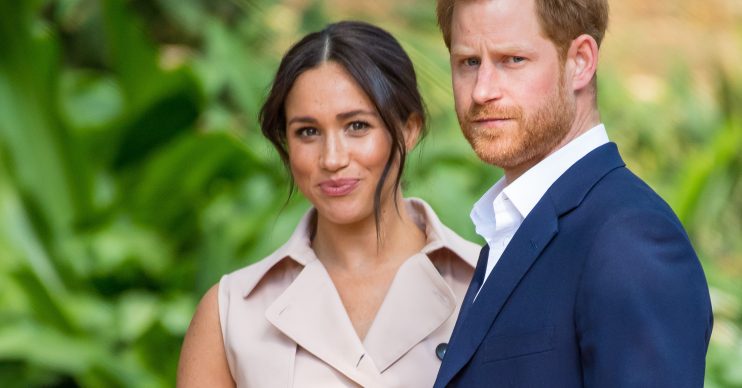 He said the couple should have bought Archie to the UK

The Queen’s former press secretary says it’s ‘spiteful and inconsiderate’ of Prince Harry and Meghan Markle not to bring baby Archie back to the UK for their final engagements as working members of the royal family.

The couple want to start a new life in Canada with their son Archie and be financially independent from the royal family.

Dickie Arbiter, who was a spokesperson for the Queen from 1988 to 2000, believes the couple should have allowed the royal family to spend some time with their son, who turns one in May.

“They flew Archie down to Southern Africa in October for that visit, so it wasn’t too far to take him there, so I believe that they should bring him.”

Dickie added: “It is spiteful, it’s inconsiderate as well, and the Queen is going to be 94 in April, she’s not going to be with us much longer.

It would be a great pity if Archie wasn’t brought over so that his great-grandparents could see him.

“You’ve got to be practical, he was in hospital at Christmas, he looked pretty frail when he came out, and he’s up at Sandringham, nobody’s seen him, and he is frail.

“Wishing you all a very Happy New Year and thanking you for your continued support! We’ve loved meeting so many of you from around the world and can’t wait to meet many more of you next year. We hope 2020 brings each of you health and continued happiness.” – The Duke and Duchess of Sussex Special thanks to Chris Martin and @Coldplay for allowing us to use one of their songs Photo and video © SussexRoyal Thanks to PA for additional images and footage

“People do get frail at that age and it would be a great pity if Archie wasn’t brought over so that his great-grandparents could see him.”

Harry and Meghan’s final engagements as working members of the royal family start this evening with them attending the Endeavour Fund Awards at the Mountbatten Festival of Music and the Royal Albert Hall on March 7.

The Commonwealth Service on March 9 will be one of Meghan and Harry’s final official engagements before they step down from royal duties at the end of the month.

The service, which will be broadcast live on BBC One and attended by senior members of the royal family, will include a reflection given by international boxing champion and Olympic gold medallist Anthony Joshua, and special musical performances by Alexandra Burke and Craig David.

Do you think Harry and Meghan are selfish? Visit our Facebook Page @EntertainmentDailyFix and let us know what you think of this story.