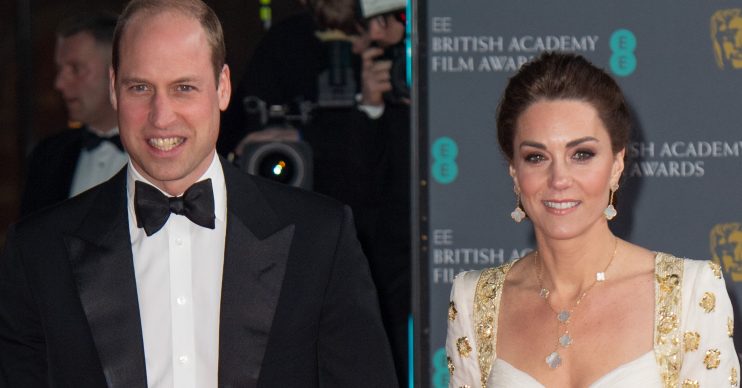 And the cameras caught it all!

The Duke and Duchess of Cambridge were left a little red-faced during last night’s BAFTAs as a joke was made at the royal family’s expense.

And cheeky Brad Pitt – who was named Best Actor In A Supporting Role for Once Upon A Time In Hollywood – couldn’t be at the ceremony at London’s Royal Albert Hall, so he left his co-star Margot Robbie to deliver the jibe.

Taking to the stage to collect the BAFTA, Margot proceeded to read out the movie hunk’s speech.

It opened with a joke about Brexit, before Prince Harry and Meghan Markle came under fire.

Holding the BAFTA aloft, Margot read: “He also said that he’s going to name this Harry because he’s really excited about bringing it back to the States with him.”

Margot – and Brad – were of course referring to Harry and Meghan’s decision to split their time between the UK and North America following their decision to step down from the royal family.

He also said that he’s going to name this Harry because he’s really excited about bringing it back to the States with him.

After shocked gasps from the audience, Margot added: “His words not mine!”

The cameras immediately panned to Will and Kate in the audience, who were seen looking at each other and laughing awkwardly, before applauding Brad’s joke.

Twitter, naturally, exploded, with many revealing they too found the joke awkward.

One said: “Serious question… did Will and Kate NOT realise there would be royal/Harry jokes tonight? Kate’s face… #BAFTAs.”

Another added: “Brad Pitt/Margot Robbie making a Harry and Meghan joke in front of Will and Kate is a big yikes #BAFTAs.”

The joke came as it was revealed that William and Prince Charles have “reached out” to Harry in the hope that he will return to the UK to live.

Head to out Facebook page @EntertainmentDailyFix and let us know what you thought of the joke.