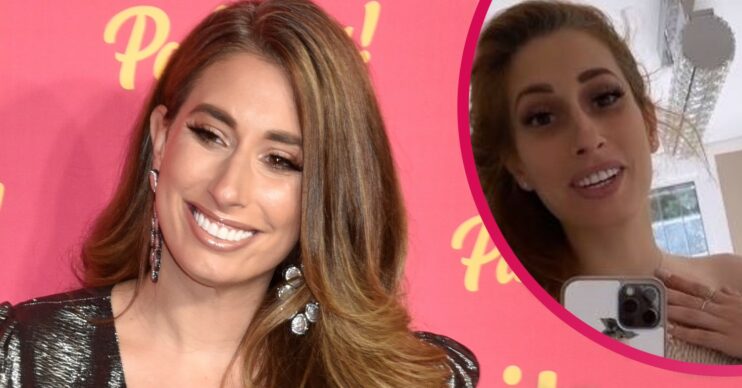 Stacey is expecting her fourth child

The Loose Women star is pregnant with her fourth child – her second baby with fiancé Joe Swash.

However, after posting a photo of her outfit today on her Instagram Stories, a fan asked whether she had already welcomed her baby as she ‘didn’t look pregnant’.

The fan had wrote in the message: “You don’t look pregnant, have you had baby girl?”

Read more: Stacey Solomon hits back at Instagram troll as she proudly shows off ‘hairy’ bump

In a video, Stacey responded and insisted her daughter is still in there!

She said: “I promise you I haven’t secretly had the baby, she’s still in there,” as she lifted up her top to unveil her big bump.

Stacey continued: “It’s just this top I think. 37 weeks and she’s still in there.”

Stacey wrote on the video: “I promise I haven’t secretly had the baby and just casually come on here like nothing happened.

“I’ll let you know when I go into labour. It’s just this top. A few more weeks left hopefully.”

Meanwhile, Stacey announced her fourth pregnancy in June of this year.

Meanwhile, last week, Stacey had a baby shower arranged by her sister Jemma.

The star shared a series of photos from the beautiful bash as she looked stunning in a pink midi dress.

A few pictures show Stacey looking lovingly at Joe as he cradled her bump.

Another snap sees Stacey with her eldest sons, Zachary and Leighton, as they both touched her bump.

Stacey gushed: “Baby Shower. Feeling so overwhelmed and emotional… What a beautiful day.

“My sister arranged a baby shower for me and our little girl and it was so special.

“I love you Jem Jem to the moon and back. I can’t believe she’s nearly here. So grateful for everything. And thank you sun for shinning today.”