Piers Morgan has insisted the Duke and Duchess of Sussex need to 'stop playing dumb games' over baby Archie's christening.

The breakfast TV host, 54, demanded details such as the identity of their son's godparents should be released publicly by the couple in a firm Twitter attack.

"If you want your home costs paid by the taxpayer, you reveal this kind of info," he tweeted to his 6.7 million followers.

Questioning why the names of Archie's godparents would not be announced, Piers angrily the accused the Duke and Duchess of "dumb cake-and-eat-it games". 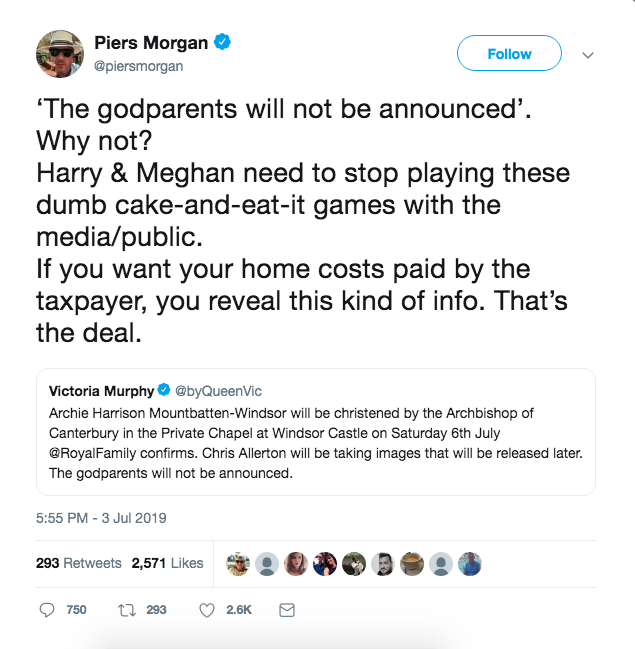 Read more: Eamonn Holmes gets nostalgic as he shares throwback snap 'that makes him smile'

According to newspaper reports, Harry and Meghan have resolved to ensure the royal tot will be a "private citizen" - with his christening an entirely media-free event.

Piers laid into those plans earlier this week, with the Good Morning Britain host demanding 'the public get their money back' if the service takes place behind closed doors.

If you want your home costs paid by the taxpayer, you reveal this kind of info.

"Private citizens don't get £2.4m of home improvements paid by the taxpayer," he tweeted.

"This baptism should be public - or the public should get their money back."

A statement from Buckingham Palace confirmed the ceremony - and the godparents - would remain private.

"The godparents, in keeping with their wishes, will remain private," it read.

It also suggested official photos will be released at an unspecified point in the future.

Around 25 guests are expected to be at Sunday's christening. 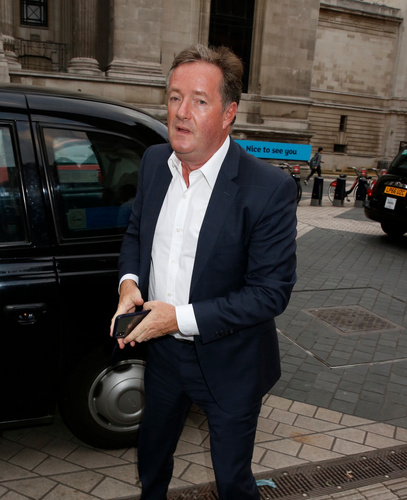 She also missed out on Prince Louis' christening last year, although she did make it to the baptisms of great-grandkids Prince George and Princess Charlotte.