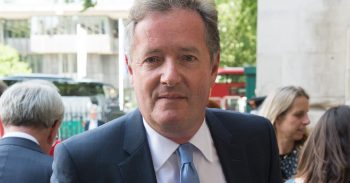 Presenter Holly Willoughby was right when she predicted “chaos” on the set of new show Bradley Walsh’s Late Night Guestlist – Piers Morgan confirmed her theory when he posted photos of her after filming last night.

Holly posted a shot of herself en route to the show yesterday, saying “On my way to @bradderswalsh new show… what’s this all about then? Let the chaos commence!”

Read more: When is Line of Duty series six on and 9 other questions after the series five finale

And it appears the chaos did indeed commence, at least if Piers’ Instagram account is anything to go by.

The Good Morning Britain presenter shared a selfie with Holly early in the evening, with the pair both looking like they were enjoying the night out.

The image was captioned, “Getting drunk on TV with @hollywilloughby. Her favourite hobby. #BradleysLateNightGuestlist.”

But a couple of hours later things had definitely taken a turn for the chaotic – Piers shared a blurry shot of Holly, in which she appears to attempt to get in a taxi.

The image was captioned, “The evening has deteriorated somewhat.”

Holly also managed to cause a stir on Instagram while she was filming – she posted to Instagram claiming that she was trying to sell a fridge.

She shared a photo of herself standing beside a small fridge, drink in hand, with a caption saying she was selling it for £30.

“Hi, I’m selling my fridge… £30 including delivery… The drawer is broken but it works and comes with my house rules… If you’re interested comment below… Please hurry… Biggest bid wins!!!!”

Paddy McGuinness seemed confused by her post, taking to the comments to say, “WTF?”

While a few fans took the post in earnest, one spotted what was going on, saying, “Bradley Walsh has something to do with this.”

But what exactly is going on will remain a mystery until the show airs.

What do you think of the photos? Leave us a comment on this story on our Facebook page @EntertainmentDailyFix and let us know.