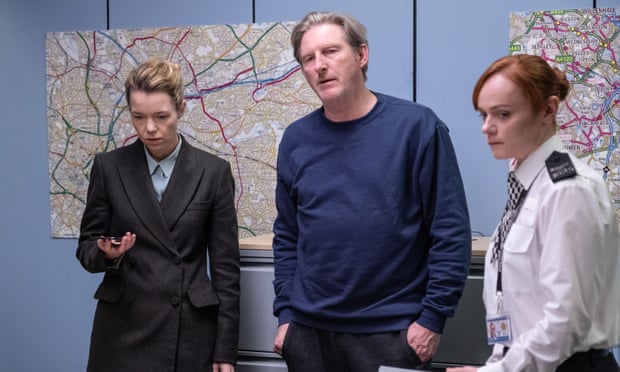 Bring on the next run!

Series five of Line of Duty drew to a close with an anxiety inducing 85-minute episode, almost half of which was conducted in the interrogation room.

It wasn’t looking good for Ted Hastings, with Detective Chief Superintendent Carmichael determined to nail him to the wall as H.

And the evidence stacked up: motive to kill Corbett; his DNA on the UCO’s body; ‘pollen analysis’ on the £50k found in his hotel room linking to other bribed coppers; his disposed-of laptop; a burner phone only ever traced when Ted was in the AC-12 building.

The AC-3 boss looked ready to implode with smugness until Kate and Steve strutted in, becoming eleventh-hour heroes as they uncovered evidence that Gill Biggeloe, legal counsel to the PCC, was working with the gang and had framed Ted!

Read more: The ultimate guide to police initialisms and abbreviations

It also transpired that there wasn’t one top dog, H, but but bent coppers, who’d been working from inside the force with the gang.

The extended episode set the scene for series six, leaving us with a multitude of threads that need exploring…

Who is the fourth bent copper?

So, if (if… he is definitely not blemish-free) Ted is now out of the running – and we accept that neither Kate or Steve is dodgy – has the real culprit been hovering in plain sight all along?

We now know that the search isn’t for a detective with the initial H… Steve discovered that H, rather, was a clue after spotting The Caddy tap out Morse code with his fingers in video footage of his dying declaration.

With Dot, Hilton and Biggeloe now exposed, this leaves one at large.

There is mounting fan speculation that Steve’s ex DS Sam Railston could be the fourth. She worked with bent DS Hargreaves in Serious Crime and has a line of contact with AC-12. Was her attempt at getting back together with Steve an attempt to get more inside knowledge from him?

Or is it Police and Crime Commissioner Rohan Sindwhani? The character is ever-present but suspiciously under-developed – seen only trotting out procedural lines and statements. The camera lingering on his face during a press conference that asserted there was no institutional corruptness in his force could have been a tease of more to come.

The Super was distraught to discover that UCO Corbett was the son of Anne-Marie McGillis, a widowed informant for the Royal Ulster Constabulary, who disappeared in Belfast in ’89, later found murdered.

Ted was rumoured to be having an affair with Anne-Marie, a relationship that could (at a stretch, albeit) have been going on even before her husband was killed.

Closing scenes of the finale saw Ted visit the graveyard where Corbett is buried, clutching a brown paper envelope and watching his widow.

Did said envelope contain money to help support her and Corbett’s young kids, because they are also his family? Or is it his guilty conscience because he informed jailed OCG member Lee Banks that Corbett was a UCO, leading to his murder? Banks is still refusing to reveal what he and Ted spoke about.

When former cop Mark Moffatt was grilled by Kate about bunging Ted £50K – the money found in his hotel room –he looked shifty, but also placed emphasis on the sum of money.

There was later a suggestion that £50K was unaccounted for… Gill herself pointed out that Ted would have needed £100K to invest in Moffatts’s proposal. Did Ted hide half away… and this was the contents of the envelope he had in the graveyard?

And, if so, someone, at some point, is surely going to come looking for this money.

Why did Ted dispose of his laptop?

“Nothing illegal, nothing extreme. I just did not want it to be found. That’s all. It was private. My wife has left me,” he told Carmichael.

Plausible? Perhaps. But is there more he was hiding on there, to be revealed in a later series?

Will Detective Chief Superintendent Patricia Carmichael be back?

She was still gunning for Ted even after Gill Biggeloe was exposed for framing him, convinced he still had a case to answer, which could make for some interesting digging in series six.

But she was warned by DCC Wise to close down the investigation, saying: “Glass houses,” a reference to bent copper PC Martina Tranter, who tried to kill Gill, being on her team of anti-corruption officers.

What next for Ryan Pilkington?

The gangster responsible for Corbett’s slaying made reference to sitting some exams in episode five, and in the finale we discovered they were police exams. He was later seen in an interview and then marching with fellow trainees in full uniform, having been accepted as a student police officer.

Has Ryan, who featured as a child gang member in series one, been placed in the force by the gang’s overlords to a act as a mole, like Matthew Cottan, The Caddy?

Who ordered the attack on Gill Biggeloe?

The OCG associate wept in the toilets after being found out, and realisation dawned that the gang weren’t going to bust her out of the station when she sent out an ‘urgent exit required’ message.

Worse was to follow as she was set upon with a knife by PC Tranter, who had been instructed by the OCG to silence her.

Why was Biggeloe not valuable enough to the gang to save her? What sensitive information were they concerned she’d bleat about in plea-bargaining attempts?

Will Lisa McQueen be in series six?

Many viewers were convinced throughout series five that Lisa was another undercover cop, but it appears she was was just a gang member. She has been granted immunity and is now living with a new identity, talking to teenagers about the dangers of crime. But she knows Ryan is still alive, and how dangerous he is. Could he come looking for her?

Will the brothel feature next series?

We still don’t know the identity of the man – suspected to be Ted – going into the building, owned by the OCG.

It makes sense that the trafficking of ‘live stock’ as sex workers by the gang, which is very unlikely to have been neutralised, becomes significant in subsequent series – and the practice of freezing DNA as a means to entrap and incriminate more police.

When is series six on TV?

Series writer and creator Jed Mercurio hasn’t started the script yet, he claims. So we are looking at 2020 at the earliest. With 10million people tuning into this latest Line of Duty cliffhanger, hopefully he and the BBC will agree not to make us all wait two years – as happened between four and five – for the next instalment!

What did you think of the final episode? Leave us a comment on our Facebook page @EntertainmentDailyFix and let us know what you think!