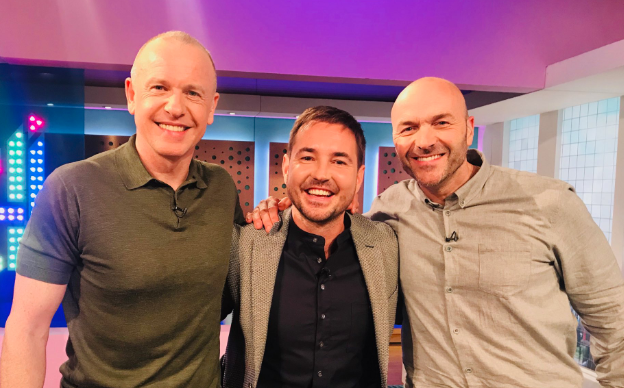 Martin, who plays DS Steve Arnott in the hit BBC One series, appeared on the sofa with Tim Lovejoy and Simon Rimmer to tease tonight’s finale.

But viewers at home appeared to be far more interested in the 34-year-old actor’s Scottish accent.

“Woooah! @Martin_compston /DS Steve Arnott is properly Scottish,” one shocked fan wrote on Twitter. “That’s as big as minds blown as whatever happens in Line of Duty tonight!”

They added, “He perfectly holds that accent in the show, no idea it wasn’t his own.”

Lots of others also praised his accent in the BBC show, with another writing: “Lovely to hear Martin Compston in true voice on Sunday Brunch. His London accent on Line of Duty is so spot on.”

“Watching Sunday Brunch and loving hearing @Martin_Compston talk on it – I love his Scottish accent. Insane how different it is to Steve.”

“I’ve only ever seen @Martin_Compston in Line of Duty so his real accent on Sunday Brunch has just blown my mind,” a fourth added.

The presenters were equally as shocked, with Tim joking: “I’m not sure I like you speaking like that.”

Watching Tim Lovejoy on Sunday Brunch trying to get his head around Martin Compston having a Scottish accent. #LineOfDuty #Dougal pic.twitter.com/RyUfphaQF4

Wooooah! @martin_compston / DS Steve Arnott is properly Scottish 😳 that’s as big a minds blown as whatever happens in Line Of Duty tonight!

He perfectly holds that accent in the show, no idea it wasn’t his own.

Can’t get my head around @martin_compston Scottish accent! 🤯! What a brilliant actor #SundayBrunch

Wow @SundayBrunchC4 did not realise that Martin Compston was Scottish !!! He does a cracking London accent !!!

What a lovely chat with ⁦@Martin_compston⁩! Catch him cooking later in the show 😁😁 #SundayBrunch pic.twitter.com/9l9Jj2jIOP

Meanwhile, the actor kept relatively tight-lipped ahead of tonight’s season finale though did promise it will be worth the wait.

“There will be a few big pay-offs and some things resolved, and we’ve got a 90-minute ep as well, which is great. It’s exciting… I think it’s alright,” he told Tim and Simon.

“The show itself has already been commissioned for another series, but who knows who’ll make it there,” he added.

The actor also admitted he’s ready for this series to finally be over, saying, “It’s been a bit mental.”

Read more: The Duchess of Sussex ‘could be induced as she’s a week over due’

The actor went on: “I’m chuffed with the attention the show’s getting, but one of the reasons I can’t wait for it to be over is I could put out a tweet saying, ‘Just had a sausage roll on Sunday Brunch’, and I guarantee someone will tweet me back saying, ‘No spoilers!'”

Martin’s Sunday Brunch appearance came after his co-star Rochenda Sandall, who plays Lisa McQueen, hinted the finale might leave the audience guessing over the identity of ‘H’.

“It will certainly have some form of conclusion but as I’m sure you’re well aware, there’s still another series to go and there’s lots of details,” she teased.