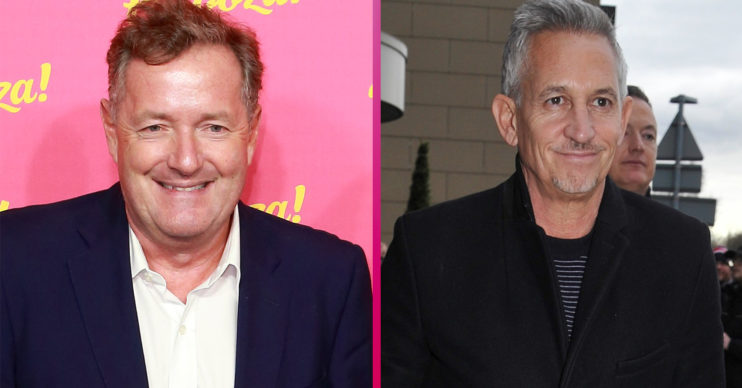 Gary Lineker signed a new deal with the BBC

Piers Morgan has praised Gary Lineker for taking a substantial pay cut with the BBC.

The footballer turned sports pundit, 59, will take a wage reduction of 23%.

His new salary will be published on the next BBC’s earning report.

This will take his annual wage down to an estimated £1.35 million.

His new earnings are part of a new five-year deal with the Beeb.

He will now be in line with Zoe Ball in terms of top BBC earners.

Gary laughed off the news and tweeted a link to the story with: “Oh dear. Thoughts are with the haters at this difficult time.”

But he has earned his sometimes rival Piers Morgan’s support.

He jokingly tweeted: “I’m absolutely disgusted that @GaryLineker has taken a 23% pay cut in the same month he’s said he’s taking in a refugee.

“How the hell are we supposed to hate you now, Jugs?”

The GMB host had previously praised Gary for agreeing to take in a refugee.

Gary says he has no worries about taking in a refugee

Although the pair have feuded many times in the past, Piers thinks Gary’s new plans are worthy ones.

He tweeted: “This is called putting your money where your mouth is.

Meanwhile, the Match of the Day host had been taunted by trolls when he expressed sympathy for migrants crossing the English Channel.

Several asked him why he didn’t take in a refugee.

He finally revealed he plans to take one into his £4 million London home.

He has applied to Refugees at Home, and says he expects to welcome a refugee into his own home ‘within weeks’.

Speaking to The Mirror he said he has no fears about having a stranger live with him.

Gary explained: “I have had so much connection with refugees over the last couple of years.”

In addition, he said: “I have met scores of young ­refugees through football schemes and they are genuinely lovely kids and they appreciate any help they can get.