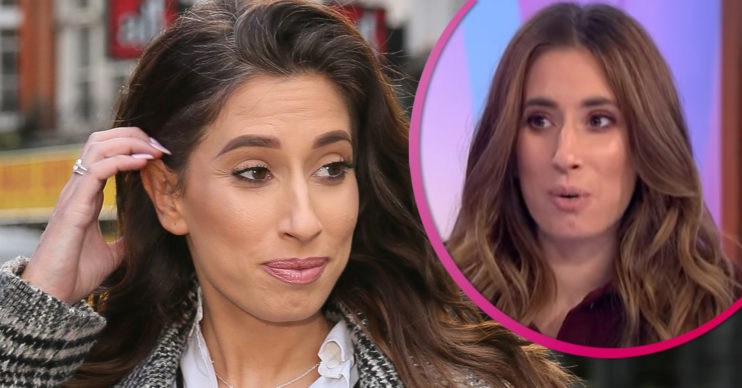 Stacey Solomon has shared details of a scary anxiety attack.

The Loose Women star, 31, recently suffered an anxiety attack seemingly out of nowhere.

Taking to social media, she shared with her fans her ordeal.

The former X Factor singer said she hadn’t had one in a while and was then suddenly engulfed with anxiety.

What did Stacey Solomon say about her anxiety?

Sharing on her Instagram stories, she wrote: “Just got a massive wave of anxiety for no reason whatsoever.

“Had a great day, and nothing has happened. It’s just decided to rear its head and say ‘Hi Stace, I thought it had been a while since your palms sweated profusely and your heart felt like it was holding its breath, so here I am.'”

Stacey continued: “Might as well use it to my advantage and bake a cheesecake.

Following her baking, she enjoyed some more quality self-care time.

Cuddling up to watch Brooklyn 99 with her son Zachary, she suddenly felt anxious again.

A character on the hit show suffered a panic attack as part of their storyline.

This triggered Stacey’s anxiety levels again, and she shared: “What are the chances?”

She then lamented that she had forgotten her breathing exercise to combat anxiety.

Stacey said she felt much better the following day

Fortunately, the next day she discovered her first rose had bloomed in her garden.

Delighted, she said it made her remember to feel grateful and show self-love.

She explained: “This rose makes me want to say… make sure you remind yourself how special you are today.

“Even if you don’t feel like it, get up and show up every day and that is enough.

“Don’t let the voice in your head make you think otherwise. It’s not telling the truth.

“And remember you’re not alone. You are loved, needed and important.”

Last year, Stacey opened up about her anxiety struggles on Loose Women.

She told the panel: “It can be really menial things, like my fridge cabinet might not be organised, and I know that sounds ridiculous, but I could be thinking about that all day.

“And then eventually it will spiral off into ‘if that’s not organised, then my life isn’t organised’. My children, what am I going? Who am I?

“And it gets worse and worse to the point where it feels like you can’t breathe.”