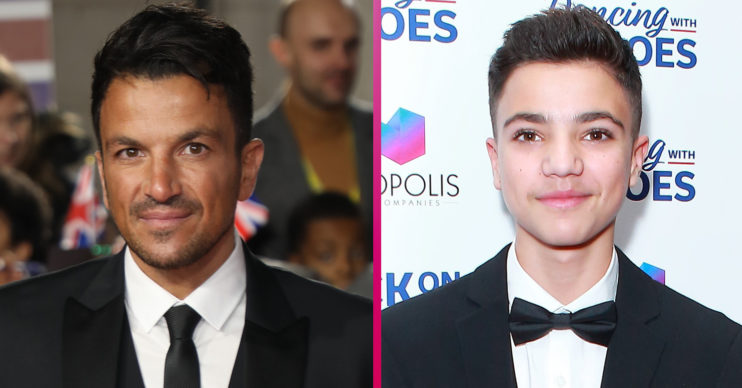 Peter Andre’s son Junior has said he doesn’t feel like he belongs in his family with his dad.

He even insinuated he doesn’t belong in his mum Katie Price’s family either.

Peter shared the clip in view of his 1.5 million followers.

Junior says: “I don’t belong in this family.

The teen made the ‘random’ comment to dad Pete

“I’m Mowgli from The Jungle Book. I belong in the jungle with the exotic snakes and bears.”

The Mysterious Girl singer tagged the video with: “Cheers son? What’s the most random thing your child has ever said to you?”

Dozens of Pete’s fans reassured him that it’s normal for kids and teens to say such things.

They also flooded his comments with ‘random’ things their own kids have said.

Some fans pointed out his unusual accent

One user wrote: “At the Colosseum in Rome ‘I can’t believe there’s no Wi-Fi here.'”

Another user shared: “My son measuring his height against me and then saying he was up to my third wrinkle on my forehead.”

If you can’t beat them, join them. #twinning @officialjunior_andre @boohoomanofficial

Pete replied, saying he has no idea what to do about his son’s somewhat affected accent.

He shared: “Man I don’t know what to do with his accent but apparently I had it too as a teen init.”

Peter recently spoke about being bullied as a child

The funny video comes just a week after dad-of-four Pete opened up about his harrowing childhood experience.

He said on Lorraine that he was mercilessly bullied as a child and that it “scarred him for life”.

Peter explained: “What happened was, moving to Australia… [it’s] is now so multi-cultural, and so beautiful. But when I first moved to the Gold Coast, we were the only ethnic family on the coast.

“We are talking 35 years ago and I had the dark hair, the big nose and the English accent. I stood out.

“We were picked on a lot. Initially, it was racism, which is a form of bullying. And it wasn’t just calling names – we got beaten pretty bad.”