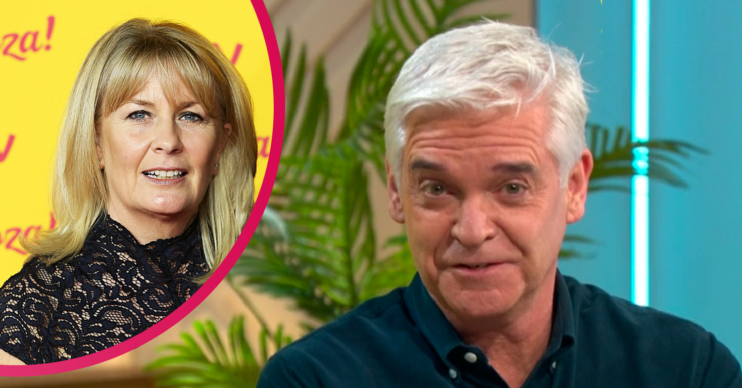 Phillip Schofield recently marked 40 years working in television and his estranged wife Steph has given him a gift.

Phillip took to Instagram earlier today to share a heartwarming gift that Stephanie Lowe and their daughters got for him.

The star of This Morning posted a snap of the gift to his Instagram story.

The gift in question was a bouquet of sunflowers, Phillip’s favourite flower.

“40 sunflowers just arrived at work from Steph and my girls to mark my telly anniversary! Phillip captioned the snap.

“My fave flower,” he continued. “Thank you xx.”

As well as sending Phil a gift to celebrate his 40th year on TV, Steph also made a rare TV appearance on Monday (February 21).

Monday’s edition of Lorraine was dedicated to Phillip’s four decades in TV. Numerous celebrities phoned in to congratulate Phillip on the achievement.

At one point during the show Steph, along with daughter Molly, phoned in to congratulate Phil too.

When asked what had led to Phillip being a success on TV for the last 40 years, Steph joked: “I don’t have a clue!”

“No, I think your previous guests have hit the nail on the head,” she continued. “He is genuinely interested in people and he’s always reading the news and he’s always keeping up on everything.

During the show, Phillip had paid a tribute of his own to his children and Steph, calling her his “rock”.

“We’ve obviously, clearly, had changes in our lives and I’ve said it’s always us four but slightly different,” he said.

“Steph has been the most incredible foundation and support and rock throughout my whole career,” he continued.

Phillip and Steph married in 1993. They have two children together – Molly and Ruby.

When Phillip came out as gay in February 2020, he paid tribute to his wife during an interview on This Morning.

“With the strength and support of my wife and my daughters, I have been coming to terms with the fact that I am gay,” he said.

The pair have remained close friends since their split.