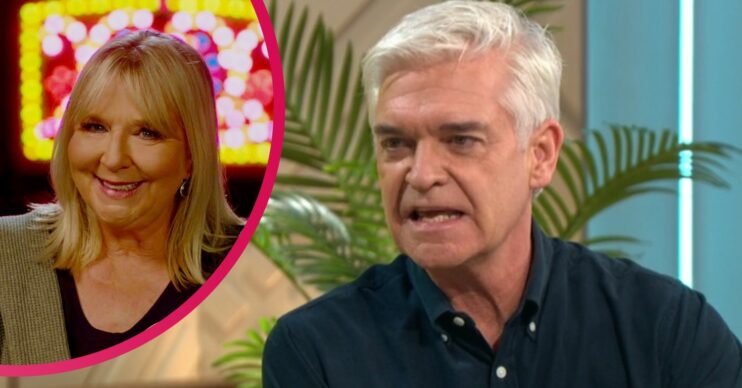 It was a little awkward on Lorraine today

Phillip is celebrating 40 years of working on TV today, and Fern was one of the people to send a special message congratulating him.

Why was Phillip Schofield on Lorraine today?

Today Phillip and the rest of ITV are celebrating a very special achievement.

Phillip, 59, has now been working in television for 40 years, and ITV was keen to commemorate the occasion.

The This Morning star appeared on Lorraine this morning to discuss his long career in television with Lorraine Kelly.

“Forty years, it’s crazy!” Lorraine told Phillip, before praising him for how he was on This Morning with her.

“You were so kind and welcoming and it was easy, it was just like talking to a pal,” she continued.

Phillip then said that over his 40 years on TV, he’s realised that he loves “being part of a team”.

Richard Madeley and Judy Finnigan left a video message congratulating Phillip on his incredible achievement, as did Miriam Margolyes.

Phillip’s former This Morning co-host, Fern – with who he is rumoured to have had a long-running feud – even called in to congratulate him.

“We do have messages from people that you have worked with, who want to send their love,” Lorraine said. “The first one is from Fern, who you mentioned. Let’s hear from Fern…”

Fern then appeared via a short video. “40 years is an incredible milestone. It is time for you to stop and look back and see all you have achieved,” she said.

“And be proud of it, you know? I am wishing you a very happy future,” she continued. “And good luck. Congratulations. Keep going.”

Once the video was over, Phillip turned to the camera and thanked Fern for her kind words.

How did viewers react to Fern’s message for Phillip Schofield on Lorraine?

Phillip and Fern reportedly had a bitter feud that ended their on-screen relationship.

In 2020, Fern addressed the rumoured feud, saying: “I began not to enjoy it so much and the morning I resigned, I didn’t know I was going to resign.

“Something happened and I just thought, ‘That’s it really’ and I walked away and resigned. I was treated pretty poorly actually,” she said.

Viewers, knowing the history between the pair, were quick to poke fun at Fern’s message to her former co-star.

“Fern did that through gritted teeth,” one viewer said.

“His face when Fern was talking. He looked a tad worried,” another laughed.