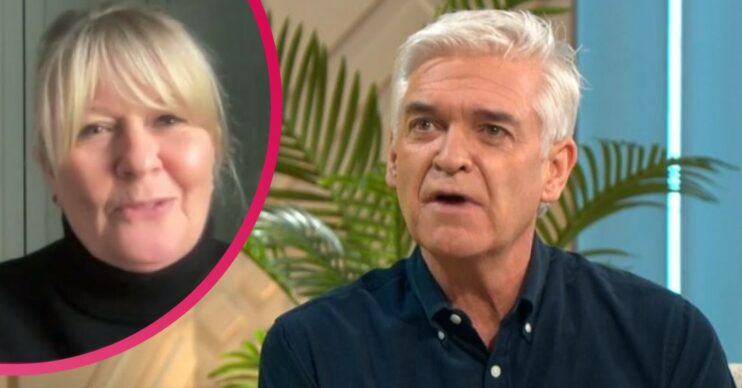 Steph Lowe was accompanied by daughter Molly on Lorraine

Phillip Schofield is marking 40 years on TV and his wife and daughter paid tribute to him on Lorraine today.

The This Morning presenter was surprised by Lorraine Kelly as she dedicated her programme on Monday to him to mark the occasion.

But his wife Steph made a joke which left both Phil and their daughter Molly in laughter.

What did Phillip Schofield’s wife say on Lorraine?

Speaking about Phil’s key to having a successful 40 years on the TV, Steph said: “I don’t have a clue!

“No, I think your previous guests have hit the nail on the head, he is genuinely interested in people and he’s always reading the news and he’s always keeping up on everything.

Steph then joked: “Oh yes, I need him to keep working!”

Oh yes, I need him to keep working!

Phil burst into hysterics as did Molly and Steph.

Meanwhile, earlier in the chat, Phil gushed over Steph and their daughters during the appearance.

He said: “We’ve obviously, clearly, had changes in our lives and I’ve said it’s always us four but slightly different.

“I was with Steph and Ruby during the big storm on Friday. We were all together for that.

“Steph has been the most incredible foundation and support and rock throughout my whole career.

Phil was surprised by many of his celebrity friends this morning to mark the huge career milestone.

His This Morning and Dancing On Ice co-star Holly Willoughby paid tribute to him as she also appeared on Lorraine.

She called Phil “so generous, so kind” and “so patient”.

Miriam Margolyes also appeared on the show via video call.

She said Phil is “truly a sweetheart” and joked he’s “very easy on the eye”.