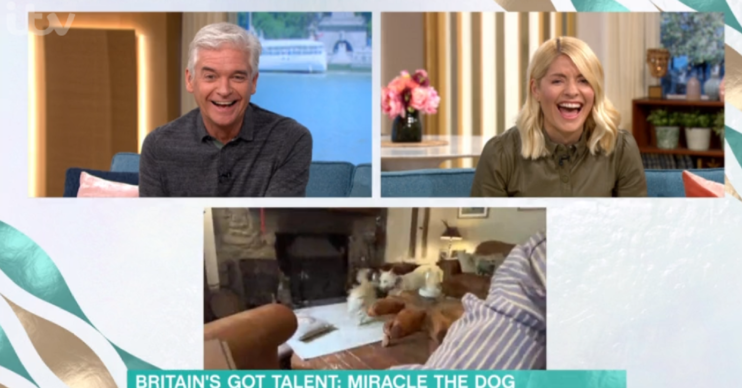 Presenters Phillip Schofield and Holly Willoughby were in stitches during a chaotic interview on This Morning with BGT dog Miracle.

The pooch was on the daytime TV programme earlier today (Monday, May 11) with his owner Amanda, following the their emotional performance on Saturday’s (May 9) episode of Britain’s Got Talent.

But Amanda had to apologise repeatedly to Phil and Holly as Miracle ran riot during the hilarious video chat.

“I’m sorry,” she kept saying, telling them: “You can probably hear everything that’s going on in the background right now! I think they are both competing for attention.”

Miracle, Amanda revealed during BGT, was rescued from the meat trade.

She continued on This Morning: “I’ve got Miracle in the background, I’ve also got Halo from China. So it’s cushion-tastic right now, being thrown around the room!”

Amanda explained how she saved the dogs, while Miracle continued to make a fuss in the background.

I think they are both competing for attention.

Phil asked Amanda if she could show them what was happening off camera.

Hilariously, Miracle then bounded up onto the couch beside Amanda, where he remained for a moment before leaping away – leaving Phil and Holly in hysterics.

On Saturday’s BGT, there was hardly a dry eye in the house during Amanda’s stint on stage.

Cross-breed Miracle was rescued from Thailand after being locked up in a cage along with 1,000 other dogs.

He was set to die in the illegal meat trade but was thankfully rescued.

Boss and animal lover Simon Cowell appeared overcome with emotion as he learned about poor Miracle’s tragic past.

And the other judges – Amanda Holden, Alesha Dixon and David Walliams – were also left choking up as contestant Amanda told them how Miracle has a special bond with her son Kyle, who has autism and cerebral palsy.

What did you think of Miracle’s appearance on This Morning? Leave us a comment on our Facebook page @EntertainmentDailyFix and let us know what you think of this story.