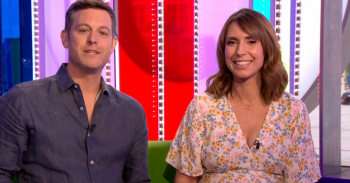 Alex will be replaced by Oti Mabuse while she's gone

Alex Jones and Matt Baker won’t be hosting The One Show together “for quite some time” after their final episode this week.

The 42-year-old presenter – who is pregnant with her second child – appeared alongside her co-star on Thursday (25.04.19) for their last episode side by side before she leaves to go on maternity leave.

Speaking on the show, Matt pointed out it will be “quite some time” before they’re back together, and Alex said: “It does feel weird … It’s going to be odd, yes but it’ll be quick.

“I’ll be back in the autumn. Keep the seat warm.”

Her co-host added: “It goes without saying, I’ll miss you.”

Read More: The One Show presenter Matt Baker hit in the face by dodgeball live on air

Alex – who already has two-year-old son Ted with husband Charlie Thomson – will be back for her final episode this evening (26.04.19), but she won’t be joined by her co-star as Matt doesn’t usually host the programme on Fridays.

Taking to Instagram after the show aired, the host – who will be replaced by Oti Mabuse while she’s on maternity leave – admitted that while it “feels so weird”, she is glad to have the opportunity to focus on motherhood.

Read More: Oti Mabuse ‘to replace Alex Jones on The One Show when she goes on maternity’

She wrote: “It feels so weird to be saying goodbye, but it’s only temporary, the autumn will come round soon enough. I’ll miss the team and lovely viewers but I’m looking forward to being just mama for a little while.”

Alex previously admitted she returned to The One Show too early after giving birth to Ted.

She previously said: “I made promises that were sort of unrealistic […] In hindsight, five and a half months would have been better. But you don’t know before going off on maternity.”