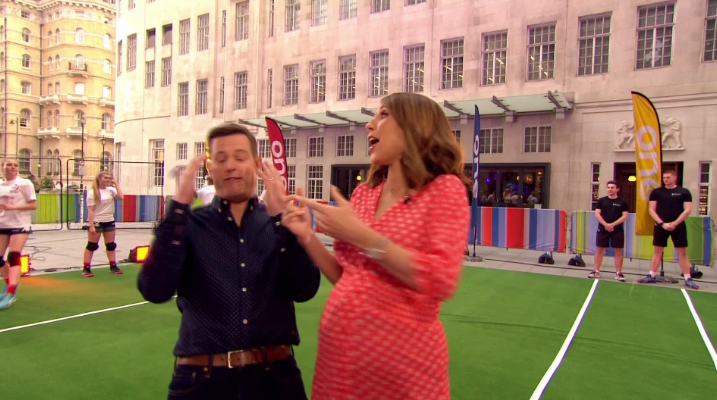 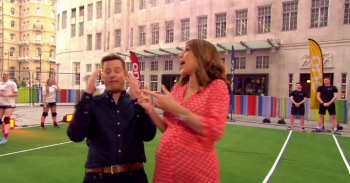 He thought he had broke his nose!

The One Show’s Matt Baker was accidentally hit in the face with a ball during last night’s show.

Matt, 41, and co-host Alex Jones were presenting a segment on Team GB’s dodgeball squad, as they practised in the background.

But poor Matt was caught off guard and was smacked in the face by the ball – much to the amusement of Alex.

As Alex burst into laughter, Matt exclaimed: “Whoah! I got it in the face. I actually thought I’d broke my nose there for a second.”

Getting revenge, Matt said: “Right who got me? Was it you,” as he threw the ball at the team players.

Explaining what they were doing outside the BBC studios in London, Alex said: “Welcome to dodgeball. The idea is to hit someone, but you can catch it.”

Matt joked: “The idea is to hit someone in the face!”

Introducing the members of the brand new Team GB squad, Matt said: “They’re quite cheeky,” before revealing they had their first tournament this weekend in Manchester.

He added: “So we’re going to be learning how to duck, dodge, dive and dibble, and all that sort of thing.”

Later in the show, Ninja Warrior UK presenters Rochelle Humes and Chris Kamara joined in for a demo with the Team GB team, and Matt managed to get away without any hits to the face.

Earlier this month, Alex – who is pregnant with her second child – had an awkward exchange with a guest, who corrected the Welsh presenter on her English.

Alex wanted to know if it will be revealed that Kelly’s character, Anna, has committed a crime.

Kelly said: “Done a crime? She may or may not have committed a crime.”

Alex then jumped in and called out: “Committed!” to which Kelly smiled, and joked: “Top of the class.”

Leave us a comment our Facebook page @EntertainmentDailyFix and let us know what you think of this story.