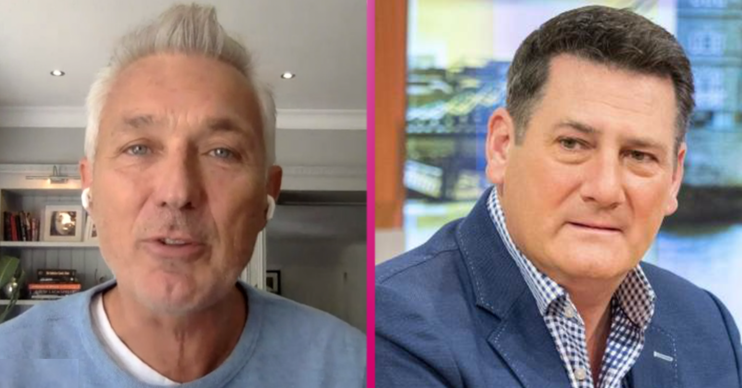 Martin and Gary Kemp have poked fun at their feud with Tony Hadley.

The brothers have collaborated on a new BBC Two spoof documentary about their lives called The Kemps: All True

Produced by comedian Rhys Thomas, the hour-long film jokes about their time in Spandau Ballet and the fallout afterwards.

“I think one of the best things you can do in this business is to laugh at yourself,” Martin explained on Good Morning Britain.

“People take themselves so seriously. This is a piece of comedy. It’s designed to make you belly laugh, not just grin at the TV.

“So please if anybody’s in this, do not get offended! It is just a laugh”

In the film, Gary is obsessed with former Spandau Ballet lead singer Tony.

So much so, he paints a picture of the star with devil horns on his head.

Explaining the scene, Gary said:  “I call him my character because it isn’t really me. It’s a version of me.

“I’ve taken all the most preposterous parts of me and stuck them all at the front.

“This is me taking the Mickey out of my character who is obsessed with the lead singer in the band – a band that no longer exists.”

He added: “It’s a universal thing – the Gallagher brothers, Robert Plant and Jimmy Page – this has been going on for a long time.

“That’s one fo the true lines in the show. This obsession. So no offence to Tony!”

GMB hosts Ben Shephard and Charlotte Hawkins asked the brothers if they thought the mockumentary may help heal the rift with Tony.

“Being in Spandau is a journey and listen, I would do it if all five of us did it but the likelihood of that happening is remote.

“As much as that pains me to say, I do think [the chance of a reunion] is remote.

“It’s one of those things I look back on and think it was a wonderful journey, we had a wonderful time.

“You know, if it ever happens again, it’d be fun, if it doesn’t, then listen, we’re great.”

“So who knows – we’re never going to say never are we.

“If all five of us want to do it at the same time, that might be fun for us, but in the meantime, we’ll keep laughing at it and enjoy it.”