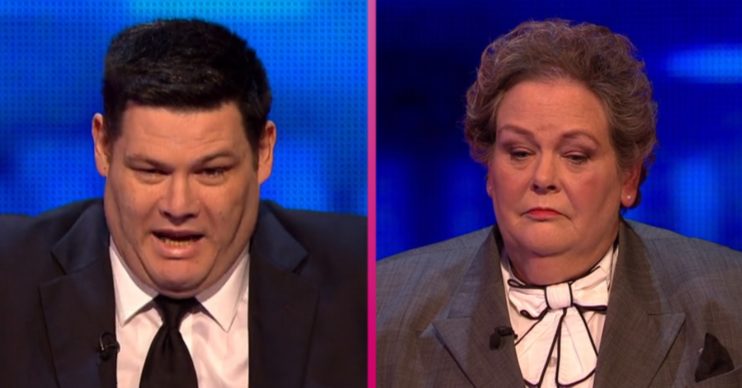 Mark Labbett shuts down Anne Hegerty milestone on The Chase

The Beast has been on the ITV quiz show since 2009

Mark Labbett and Anne Hegerty could be vying for the position of top quizzer on The Chase amid reports The Governess has reached an incredible new milestone.

And after it aired, the Twitter account of a fan site for The Chase said it was a significant episode for The Governess.

What did Mark Labbett say about Anne Hegerty?

However, Mark Labbett responded to the Tweet and claimed he had already achieved Anne’s seemingly impressive milestone.

The account for One Question Shootout tweeted: “Anne is the first chaser to win 300 episodes on the show. #TheChase.”

But The Beast responded: “I achieved that worldwide a while back.”

I achieved that world wide a while back 🙂

Mark has appeared on the US and Australian versions of the popular quiz show.

Anne is also a chaser on the Australian version, as is their fellow quizzer Shaun Wallace.

I achieved that world wide a while back.

In a subsequent tweet, One Question Shootout claimed that both Anne and Mark have more than 400 wins when taking into account the UK, US and Australia versions.

ED! contacted the show regarding this story.

In the UK, The Chase currently airs weekdays at 5pm on ITV.

Darragh Ennis has held his own so far and impressed viewers with his quizzing skills – so much so that some have even claimed he is better than The Beast.

However, the Irishman was quick to shut that down on social media, where he paid tribute to Mark and admitted he himself still had a lot to learn as a chaser.

Responding recently to a fan on Twitter who said he could teach Mark a thing or two, Darragh said: “Hahaha. Absolutely not. I am the young Padawan [a Jedi apprentice] and I learn from Mark and the others every day.

“I’ve a LOT of work to do to get up to their standard.”