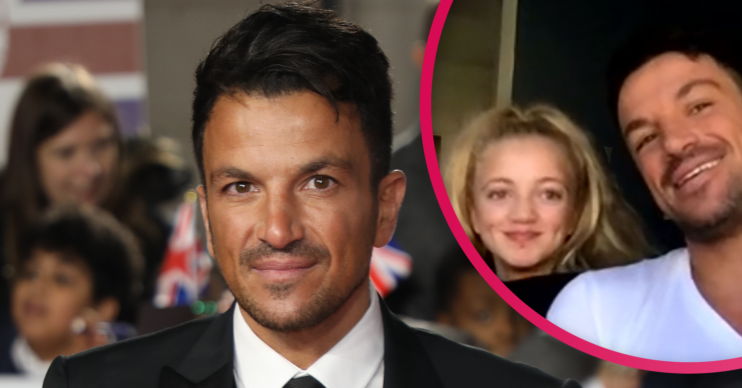 Katie Price’s teenage daughter Princess has admitted she wouldn’t have any manners if it wasn’t for her dad Peter Andre.

The 13-year-old made the confession on her newly launched YouTube channel, where she compared the parenting styles between her famous mum and dad.

Princess sweetly started the video off by introducing viewers to her “crazy family.”

What did Princess say?

She later went on to discuss the differences between Katie and her step-mum Emily MacDonagh, admitting: “My mum and Emily are completely different.

“They’re both funny and they have a good sense of humour both of them, but on my dad’s side things are more organised and a bit more strict.

“When you come to my mum’s side she’s like: ‘Have whatever you want, go ahead, do this, do that.’ I think that’s why Jett and Bunny are naughty.”

Princess then backtracked on her comment, adding: “No, that is a lie. Sorry mum I love you. But what my point is that they’re different people.”

The fun six-minute video was the first for Princess since launching her YouTube channel this week.

Plugging the channel on Instagram, Katie, 42, wrote: “So my beautiful @officialprincess_andre has been wanting her own YouTube channel for so long and I’ve finally caved.

“I think she’s definitely going to be more popular than her mum lol 💗 .”

It comes after the teenager was also recently allowed to have her own Instagram account by her parents.

Princess turned 13 last week (June 29) and marked the occasion by sharing her first ever post on the social media site.

The singer has made no secret of his strict parenting techniques in the past.

He previously told OK! magazine: “I’m strict in some ways. On school nights they go to bed at a certain time, but at weekends I give them freedom. I think kids need boundaries.”

In a separate chat with Reveal magazine, Peter admitted being stricter with Junior and Princess than wife Emily is.

But he said they balanced each other out as she’s stricter with their younger children Amelia and Theo.

Peter, 47, added: “It’s the balance of trying to give them a little bit of freedom, but not too much.

Earlier this year, Pete explained that he has banned his two eldest children from ever signing up to hit ITV2 show Love Island.

The Aussie star said: “I’ve already told Bista [Princess] that unless she gets approached to do a show about nuns, she won’t ever be doing anything like that. And Junior sometimes asks if I’d let him go on, but I’ve said no way – unless he’s the host, not a contestant.”

He added: “Listen, I know the day will come when they make their own decisions and won’t listen to their dad, but until then I’ll do my best to guide them into making the right choices.”