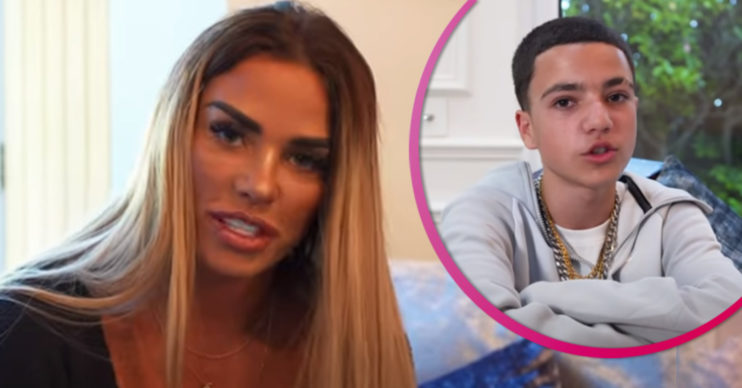 The cheeky teenager fancied a spot of joyriding

Katie Price has filmed herself begging son Junior to return ‘her legs’ after he pinched her mobility scooter.

Katie, 42, is unable to walk after having major surgery on both feet following a horror fall in Turkey this summer.

But last night, the desperate mum was left high and dry after Junior took her only means of transport for a joyride.

Taking to Instagram, Katie shared a video of Junior, 15, doing laps around the living room on her electric scooter.

She can be heard asking him: “Junior, can I have my legs, please?”

When he refused to hand it over, the desperate mum-of-five then called on eldest son Harvey for moral support.

Shouting to the 18-year-old, who was lying on the sofa, Katie said: “Harvey, tell him!”

Junior continued driving around, telling his mum and brother he was “having a fun time”.

Katie then yelled: “Tell him again, Harvey! Tell him I want my legs back!”

The new video of Junior came hours after Katie shared some gruesome footage of her stitches being removed from her feet.

The former glamour model clung onto boyfriend Carl Woods for support as she winced in pain.

Katie broke both of her feet while on holiday in Turkey in July. She later endured a six-hour operation.

They claimed her fall was made up to cover up the so-called ‘real’ reason why both feet were in plaster.

But Katie has hit back and, along with the help of her latest gory video, proved the truth.

Meanwhile, in a recent interview with The Sun, Katie revealed she could have died when she plunged off the wall.

Although it appeared low when she climbed on it, there was a 25ft drop on the other side.

“I could have hit my head and I could have been paralysed, I am actually lucky I landed on my feet.

“It was horrific pain. It felt like a nail gun hitting me continuously, like non-stop electric shocks.”

Katie has since spent time in The Priory, as the accident has affected her mental health.