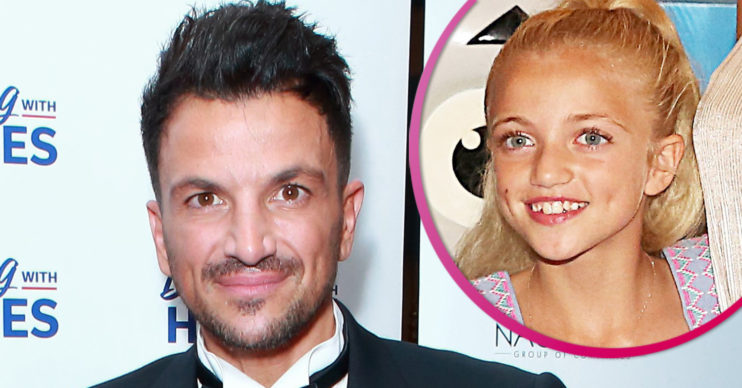 Her voice is beautiful

Peter Andre has given fans a listen to his daughter Princess singing – but admits she struggles with her confidence.

Peter, 47, shared a clip of Princess belting out Andra Day’s Rise Up in their at-home recording studio.

But although her voice is stunning, the Aussie singer has said Princess, 13, needs to believe in herself more.

She can sing…. I wish she’d believe it. Sunday night a BRAND NEW series of #lifewiththeandres Come and Join us :)))))) @officialprincess_andre @officialjunior_andre @youtube @thesun

In the clip, which is a teaser to the new series of their reality show – At Home With The Andres – Pete says: “The kids love singing.

“They’re great singers, both of them [Princess and Junior]. I’m not going to force it on them. When they’re ready, they can do it.”

Do you know what I mean? You’ve got a beautiful voice.

He then calls Princess, who he nicknames Bista, into the room and she takes to the mic.

Just seconds in, she says: “Dad, I can’t…like…the song is weird…the backing track…”

Peter then plays Princess’ recording back to her and says: “Do you know what I mean? You’ve got a beautiful voice.

“You’ve just gotta have the confidence.”

Posting the footage on Instagram, Peter told his 1.5 million followers: “She can sing…. I wish she’d believe it.”

Fans have gone wild for clip, with one commenting: “Well done sweetheart you have a fab voice listen to your dad.”

Another wrote: “She has a beautiful voice, a star in the making.”

A third added: “Very very beautiful voice! You can sing! Believe in yourself sweet girl , you have a very bright future.”

Even Kieran Hayler, who was previously married to Princess’ mum Katie Price, has given his opinion.

What did Kieran say to Peter Andre and Princess?

Peter welcomed Princess and her brother Junior, now 15, during his marriage to Katie.

The star, who burst onto the pop scene himself when he was in his early 20s, is now married to doctor wife Emily.

Read more: Piers Morgan reveals he has been ‘fat-shamed’ by his GMB co-stars

They have two children together, six-year-old daughter Amelia and son Theo, three.

Earlier this year, Peter shared another video of himself singing alongside Princess in their studio.

At the time, he explained on Instagram that he had been ready to record himself when his daughter popped in and took over.

Nice tone bist. Ok this surprised me. Was just getting ready to do the lead vocal on all my harmonies and in walks a Princess. Probs post the proper thing tomorrow. She’s asked me to tell you that Her tik tok is princessandre22 #andreaccapella @brunomars #wheniwasyourman #mondayaccapella #lockdownharmonies

Pete wrote: “Nice tone, Bist. Ok, this surprised me. Was just getting ready to do all the lead vocals on my harmonies and in walks a Princess.”

Princess could then be heard singing Bruno Mars’ When I Was Your Man over the top of her dad’s backing vocals.

At the time, one fan suggested: “Pete you should put Princess on The Voice Kids. she has a lovely voice.”