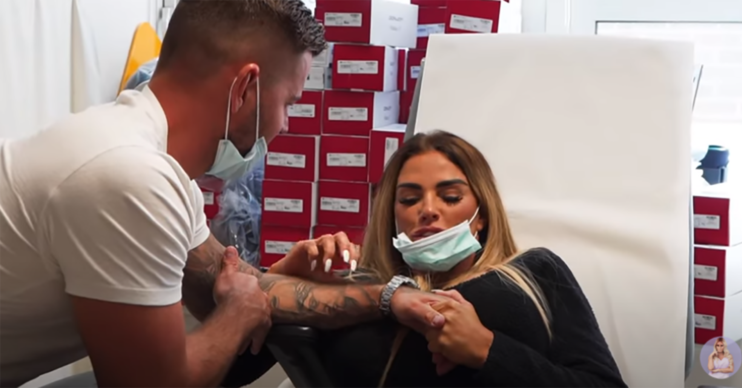 Katie Price has shared an explicit video of her having her stitches removed from both of her feet.

The former glamour model, 42, clung onto boyfriend Carl Woods for support as she winced in pain.

She broke both of her feet back in July, and went on to undergo a six-hour foot surgery.

Sharing on YouTube, she cried out in pain as the stitches were individually removed.

Each stitch was individually removed

Prior to the removal she had a medical professional confirm that she hadn’t had bunion surgery.

Trolls online had previously speculated that she’d actually had a cosmetic procedure on her feet.

She asked: “I definitely haven’t had bunion surgery, have I Tom?”

Medic Tom replied: “Absolutely not. Your bunions would be at the front. And you can see where you had the surgery was at the back.”

One of Katie’s stitches was embedded

Katie added: “So everyone who speculated that I haven’t broken my feet and that…I definitely have. Jesus.”

The camera then zoomed in on the painful looking stitches and scarring.

As each stitch was removed, Katie winced and yelled out in pain.

Crying at one point, Carl was there for support.

Katie and Carl made their red carpet debut

At first she clung onto his arm, and eventually he had to physically hold her down on the bed.

One stitch was embedded, and took multiple painful attempts to extract.

Once over Katie showed off her stitch-less feet and remarked on her hairy legs.

She went on to inspect the final stitch: “You can see that was proper embedded in me.

“You little [bleep]. You caused me all that pain!”

“It’s been a little emotional rollercoaster. We had our appointment at 12 – it is now two.

“I still can’t put pressure on my feet. But it means I can get them out and touch them.

“But I’m still nowhere near the standing stage.”

Katie previously revealed she has ‘life-changing injuries’ that could take her up to two years to fully recover from.

Last night she made her red carpet debut both in a wheelchair and with Carl.

Attending a night club anniversary party in London, Carl hoisted her out of her chair for red carpet photos.