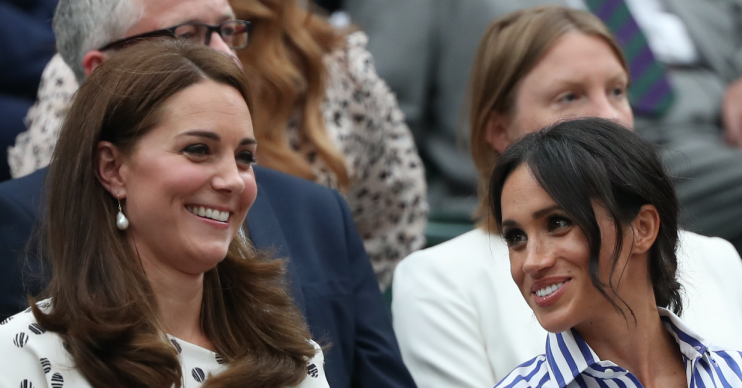 Will it be a case of love all?

Kate Middleton and Meghan Markle could be set to publicly end their reported feud as experts predict that they will attend Wimbledon together next month.

The pair enjoyed their first public girls’ day out at the tennis tournament last year.

Mum-of-one Meghan is currently on maternity leave but, with one of her best friends, tennis ace Serena Williams, playing in the tournament, she is expected to head along to watch her in action.

Read more: Sam Faiers ‘in therapy to stop her pulling out her own hair’

Kate, meanwhile, is an avid tennis fan and, as patron of the tournament, will be in attendance when it opens on July 1.

Royal author Katie Nicholl told Fabulous: “It would be wonderful to see Kate and Meghan at Wimbledon again this year and it would really put those rift rumours to bed.”

She added: “Meghan is on maternity leave and won’t be returning to work until October, but I have been told we will see her at a handful of things before then and there’s a chance we might see her at Wimbledon, particularly if Serena is playing as they are such close friends.”

Read more: Hayley Tamaddon hits back at follower who told her to put her baby bump away

Katie added of the women, who were last seen together at the Trooping The Colour ceremony: “My understanding is that there is no real issue between the women, they just aren’t particularly close, but with motherhood in common, it might be that a closer friendship flourishes.”

Meghan, meanwhile, became a first-time mum to baby Archie back in early May.

She told Yahoo: “I think we may see Kate and Meghan at Wimbledon together again, which would be great, it would be a lovely show of togetherness.”

She added: “They clearly had a great time when they went before and they are the two major tennis fans.”

If Meghan does attend Wimbledon, it looks set to be a busy couple of weeks for the young family. She and Harry are reportedly holding their son’s christening to coincide with the American 4th of July holiday weekend, so their Stateside friends – including Serena – can attend.

Will it be a case of love all as Kate and Meghan put their reported troubles behind them? Let us know what you think over on our Facebook page @EntertainmentDailyFix.