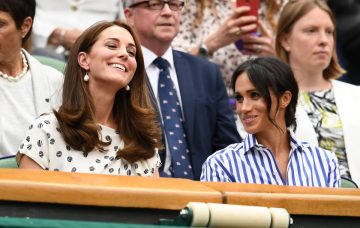 Duchess of Cambridge and Duchess of Sussex attend Wimbledon together

It's their first official outing together without their husbands

Kate and Meghan were scheduled to watch Serena Williams playing Angelique Kerber in the ladies’ singles final from the Royal Box at Centre Court.

But after the semi-final between Novak Djokovic and Rafa Nadal was suspended at 11pm on Friday night, they also got the added treat of seeing that match resuming.

Saturday’s outing to Wimbledon is the royal pair’s first official engagement together without their husbands.

On Sunday 15th July, The Duchess of Cambridge along with The Duke of Cambridge will attend the @Wimbledon Gentlemen's Singles Final #Wimbledon

This will be the first Wimbledon royal box experience for Meghan, Duchess of Sussex, although the 36-year-old has attended the tournament in previous years before meeting now-husband Prince Harry.

It will be a particularly special day out for Meghan, as she’s known to be good friends with Serena, 36, who was among the guests invited to the royal wedding in May.

Serena told reporters this week that she and Meghan have “always had a wonderful friendship”.

She said former Suits actress Meghan had supported her in previous years at Wimbledon and although this time around Meghan will be watching from the royal box, their friendship has not changed.

“We always have supported each other, just been there for each other through a lot,” said Serena.

Serena gave birth to her first child, daughter Alexis Olympia Ohanian Jr, less than a year ago and if she wins Wimbledon, she’ll be the first mother since 1980 to pick up the trophy.

Are you looking forward to watching Serena’s final?  Leave us a comment on our Facebook page @EntertainmentDailyFix and let us know what you think!

Duchess Of Cambridge Duchess of Sussex