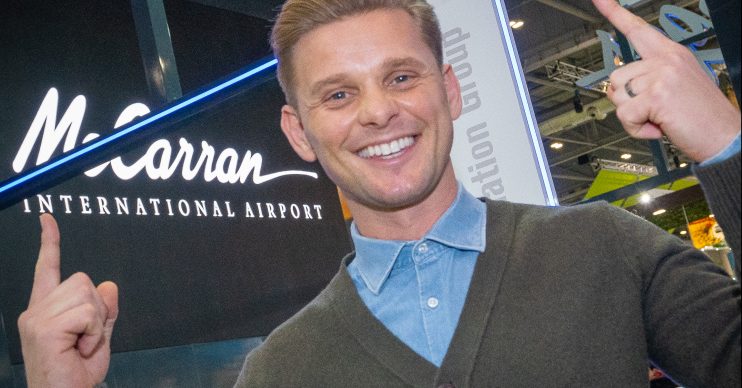 He was at an event in London

Reality star Jeff Brazier appears to be wearing his wedding ring again after taking it off amid reports he and his wife Kate Dwyer were experiencing marriage “difficulties”.

Read more: Jeff Brazier opens up on past ‘mistakes’ as he makes ‘progress’ in new career

Jeff was snapped at the World Travel Market conference, held at the ExCeL Centre, where he was promoting Las Vegas as a family destination.

In the pics, Jeff cuts a casual figure in a grey cardigan and blue shirt as he smiles for the camera and holds up a miniature version of the famous Welcome to Fabulous Las Vegas sign.

A wedding band can be seen on the ring finger of his left hand.

Previously, a video posted to his Instagram – a still from which was published by The Sun – showed him without his wedding ring.

Last month, Jeff admitted he and Kate were having some marriage problems a year after tying the knot.

The couple got married in September last year in Portugal and their special day was exclusively covered by Hello! Magazine.

They have had some difficulties but they are doing their utmost to work through them.

But after fans recently spotted the pair had unfollowed each other on Instagram, Jeff’s rep revealed the couple had gone through “some difficulties” and were “doing their utmost to work through them together”.

A spokesman for the star told The Sun: “There is categorically no split between Jeff and Kate.

“They have had some difficulties but they are doing their utmost to work through them together and will continue to do so in private.”

Eagle-eyed fans also noticed that the pair haven’t been pictured together since August, when Jeff shared photos of them on a bank holiday break.

The couple got married last year and at the time, Jeff told Hello!: “This isn’t just any wedding, this is a really special one.

“It doesn’t just represent Kate and I putting rings on each other’s fingers. It represents the fact that we won at something really tricky.”

The dad of two added: “We won at becoming a family.”