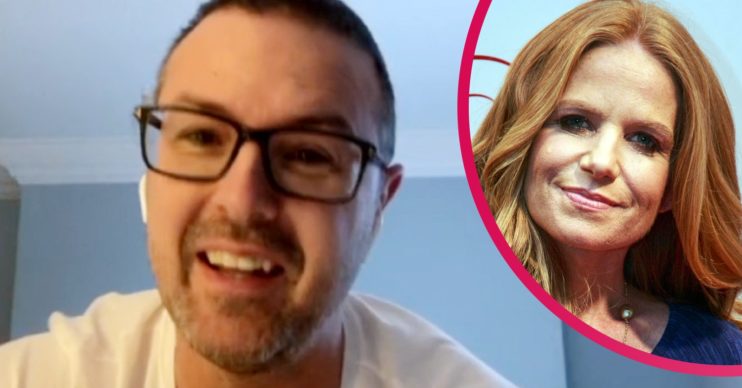 The show described him as a 'comedy genius'

Earlier this week, the ex EastEnders actress abruptly ended her interview on the show after taking issue with the way it described her to viewers.

However on Friday’s (March 19) episode of GMB, Paddy was delighted with the way it described him – and used it as an opportunity to quip about what happened with Patsy.

The Bolton comedian, 47, was on to chat about his involvement in Comic Relief 2021.

GMB hosts Charlotte Hawkins and Kate Garraway welcomed Paddy onto the programme via video link and he initially apologised for the set-up, revealing he was filming on his phone from a hotel.

Read more: Patsy Palmer on GMB: Actress swears at followers who criticised her for storming off show

He then noticed the on-screen graphic referred to him as ‘comedy genius Paddy McGuinness’.

“Well done on the ‘comedy genius Paddy McGuinness’, there’s no walking off here with that!” he joked, grinning.

There’s no walking off here with that! Oh no… I’m going nowhere…

Earlier this week, host Ben Shephard apologised as an angry Patsy Palmer, 48, hung up on the programme.

Ben and his co-host Susanna Reid had the former Bianca Jackson star on via video link from her home in Malibu, California.

What happened with Patsy Palmer on GMB?

However, not long after she appeared on the programme, she cut the interview short and accused GMB of unnecessarily bringing up her past struggles – taking issue with it saying she had gone from ‘addict to wellness guru’.

“So I am just going to switch off, do a real Piers Morgan, and say it’s not okay to have ‘addict to wellness guru’ on the bottom of the screen.”

She argued that her issues were “years ago”, were “talked about” and were now “over”.

Ben told viewers it was not the show’s intention to cause offence. He pointed out that “addict to wellness guru” was actually a quote from Patsy’s book.