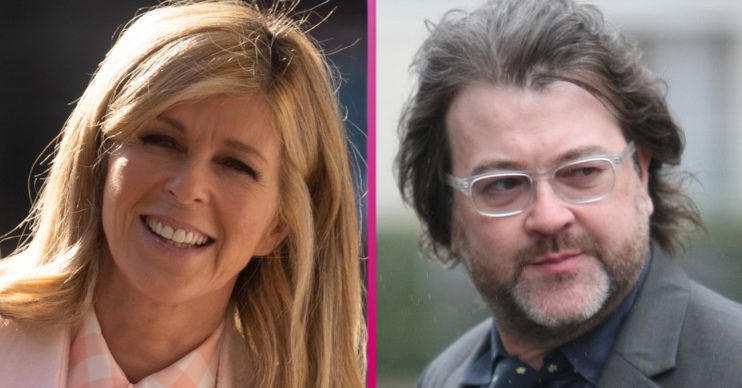 How did Kate Garraway meet Derek Draper and when did they get married?

They were due to renew their vows

Kate Garraway is the devoted wife to Derek Draper but when did they meet and get married?

Here we take a look at how Kate and Derek first met and more about their love story.

How did Kate Garraway and Derek Draper meet?

However, Kate said she wasn’t that bothered at first, and initially ignored his attention.

Speaking to The Times, Kate said: “Derek arrived thinking it was a date and that I was being incredibly cool by ignoring him.”

Then when she did agree to go on a formal date with him, HE tried to cancel.

She continued: “He asked me out, but the day of our date called to say he had a clash

“He’d promised to serve wine at an amateur watercolour painting exhibition at his church.

“I really thought it was a wind-up. But I turned up and he was indeed serving wine to the congregation in a salmon-pink jumper.”

Fortunately Kate was impressed by his good deed, and their relationship soon formed into a full-blown romance.

In the early stages of their courtship, Kate was in and out of hospital with a kidney cyst.

Derek dutifully cared for her throughout – completely winning Kate over.

When did Kate and Derek get married?

Kate and Derek got married in 2005, just a year after they began dating.

They married at a low-key ceremony at St Mary’s Parish Club in Chorley.

She then discovered that Derek had secretly taken dance lessons for the big day.

Who was Kate married to before?

Kate was married to Ian Rumsey from 1998-2002. He is a journalist and Kate’s former boss at Meridien.

There were rumours at the time that their split was caused by Ian’s alleged infidelity.

However, Ian fiercely denied this at the time.

Kate said in a statement: “It’s always terribly sad when a marriage comes to an end. I’m disappointed that what’s a very private matter has been brought into the public domain.

“I was dismayed by reports in the papers because they are substantially inaccurate.”

How many children do Derek and Kate have?

Derek and Kate have two children – a daughter Darcey, 15, and William, 11.

Kate had to single-handedly home school her children during lockdown.

However, she revealed earlier this month that they were all thrilled about their return to school.

Speaking on GMB, Kate said: “Actually to be honest, they are very excited about seeing friends at school and getting back into the swing of it.

“But probably not as excited as mums and dads out there.”

Did they Kate and Derek renew their vows?

Kate and Derek planned to renew their wedding vows after Kate’s stint on I’m A Celebrity… Get Me Out Of Here!

Following their emotional reunion in the Aussie jungle, Derek got down on one knee and proposed to Kate again.

He’d initially intended to do it in front of the cameras, but he was too teary eyed at their initial embrace.

Kate later explained to You: “When Derek came to meet me after I left the jungle, he was planning to propose to me again [with the ring, in front of the TV cameras], but he got overwhelmed and burst into tears.

“The kids leapt out and surprised me, and Darcey said, “Oh Dad – you didn’t do it!” So he got down on one knee and proposed… and I said yes, obviously.”

However, sadly the renewal of vows have not happened as a result of Derek’s battle with coronavirus.

She told Fabulous magazine in April of last year: “We’d planned the wedding for the end of summer, but I don’t suppose we’ll be booking anything now because we don’t really know what we can do.”

What did Derek Draper do for a living?

But he retrained as a psychotherapist at The Wright Institute in Berkeley, California.

Since then he has run a psychotherapist clinic, and held various other leadership roles.

How long has Derek Draper been poorly?

Derek entered ICU after testing positive for coronavirus in March 2020.

He is believed to be the longest surviving COVID-19 patient in the UK.