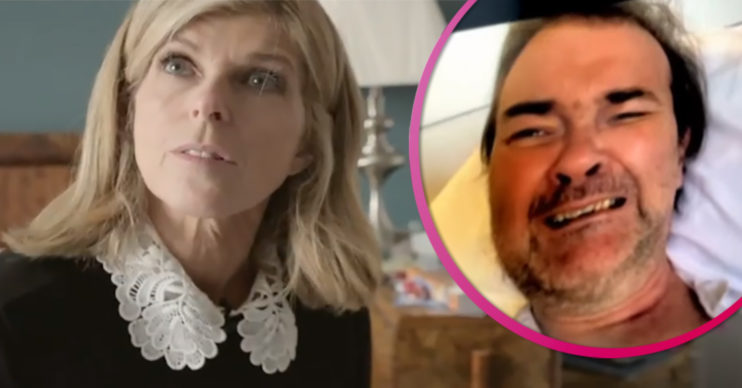 Kate Garraway documentary Finding Derek: Where to watch now – and its 10 most moving moments

The film is an emotional watch

Kate Garraway’s moving documentary Finding Derek is back in the news thanks to its prominence at this year’s National Television Awards.

The film was shortlisted for new category authored documentary.

The one-hour special, which aired on ITV in March this year, follows her husband Derek Draper’s battle with COVID-19.

Derek had been in hospital since March last year after contracting the virus, which ravaged his body.

The programme, widely praised by viewers and critics, saw Kate juggle work, her home and the couple’s children as she came to terms with Derek’s illness, uncertainty about his survival, and preparations for him coming home.

Where to watch Finding Derek

If you missed it first time around or would like to watch it again, Finding Derek is available on ITVHub.

Here are the 10 most emotional moments from the film.

Speaking on FaceTime with Kate, Derek said: “I’ve got to the point where I just think, [bleep] it. [Bleep] it.”

2. Kate promises to ‘save’ Derek

Meanwhile, following Derek’s emotional comments, Kate promised her husband she would “save” him during the emotional FaceTime call.

Kate told him: “I know you feel like you’re trapped in your head and it’s terrifying.

“But you’re coming home, you’re coming back to your life. And you will be the person better than you were before. You will be. And I will find a way to make it better OK?”

She added: “I promised you that I would save you and I’m gonna save you.”

Kate and Derek’s children, Darcey and Billy, also spoke about their dad’s health.

Darcey told the camera: “We’ve heard rumours that he’ll get better before next year but we really don’t know.”

When asked if she thinks he’ll be back for Christmas 2020, Darcey said: “I hope so. But it might be hard because he might still be hooked up to things to help him survive…

“It’s not scary in the way that it looks scary, but it’s scary to think that we might lose him.”

Meanwhile, Billy added: “Dad usually does LEGO with me the most, but since dad’s not here I’ve been doing it on myself…

“I really want him back but we don’t know if he’s going to get better or not.”

4. Kate admits she and Derek might have to fall in love again

In another moment, Kate spoke about the possibility of having to fall in love with Derek again if he’s “not her Derek” once he is out of hospital.

“Will I be okay? I wont be delighted because I wouldn’t wish that on him, it will be very tough on us both, but he is for better or worse…”

“I feel as though we might have to fall in love again, find out who each other are now a little bit.”

Follow Kate Garraway’s emotional journey as her husband Derek recovers from the effects of Covid in a new documentary.

One moment which broke viewers’ hearts was when Kate shouted “Derek I miss you” as she picked up a photo frame from a pile.

Kate became emotional as Derek showed his first sign of emotion in the documentary.

On Derek’s 219th day in hospital, Kate sat on her bed with her phone in her hand as she showed a video of Derek showing emotion.

She explained: “Right, I’m going to find the first day he showed emotion, which is a big breakthrough.”

The video showed Derek in his hospital bed as Kate told him he was “amazing”.

He then broke down in tears as an emotional Kate said she was “so proud” of her husband.

Watching the footage, Kate became tearful as she said: “So that’s the first time he showed emotion.”

7. Kate calls her husband her “beautiful boy” in the documentary

During another FaceTime call, the star showed Derek their children performing the infamous lift from Dirty Dancing.

As the pair did the lift, Kate asked her husband: “Do you want to watch them being ridiculous? It’s their Dirty Dancing lift.”

She then added: “I love you darling. Beautiful boy.”

During another part, Derek shared a smile with his son Billy as he made Star Wars Lego.

Billy was sweetly telling his dad what he was making via FaceTime.

Another moment showed Kate speaking to Derek after he woke from his coma last year.

“I’m so proud of you, you’re just so brilliant. Every day we’re getting closer to coming home and being with the kids.”

At the end of the documentary, Derek delivered an emotional message to Kate.

He told her: “I love you forever and a day.”

Did you watch Finding Derek? Let us know on our Facebook page @EntertainmentDailyFix.