He had to bubble away from family for nearly three months

Gorka Marquez had Strictly Come Dancing fans in tears as he enjoyed a highly emotional reunion with his baby daughter.

He was unable to see his one-year-old or girlfriend Gemma Atkinson during his stint on the show. The star had to bubble with celeb dance partner Maisie Smith for the duration of the competition.

Gorka and EastEnders actress Maisie made it all the way to last night’s series finale. They pulled in superb scores of 29, 29 and 30 for their efforts.

But despite entering acclaimed performances, the pair were beaten to the Glitterball Trophy by winners Bill Bailey and Oti Mabuse.

However, 30-year-old Gorka certainly looked like he had won his biggest prize as he embraced Mia.

He and Gemma both posted images on Instagram showing the moment he reunited with his family.

Read more: Why did Peter Kay cancel his tour? Comedian to feature on Radio 2

And similarly, Gorka wrote on the two images he shared: “HOME.”

Gorka appeared to be deeply moved to be able to hug his little one again.

With closed eyes, he held her very close as he wrapped his arms around the tot.

The star had apparently just stepped through the door as Gemma took the pic. He was still wearing a beanie and thick hoody when he scooped Mia up on arrival.

Fans were very touched by the scene, with dozens posting crying emojis in the comments section.

Plenty of Strictly stars past and present also noted how affecting they found the family moment.

And Karen Hauer wrote: “Must be the best feeling ever. Love you guys.”

Previous Strictly winner Ore Oduba chipped in: “Can’t imagine the feeling. So glad you’re all back together.”

And Giovanni Pernice pronounced the image to be “the best pic ever”.

Giovanni’s most recent celeb partner, Ranvir Singh, congratulated Gorka on his hard work and for being a “proud daddy”.

And another commenter wished Gorka all the best for a happy festive time with his family.

“Bet you couldn’t get home fast enough. Enjoy Christmas with your girls,” they wrote. 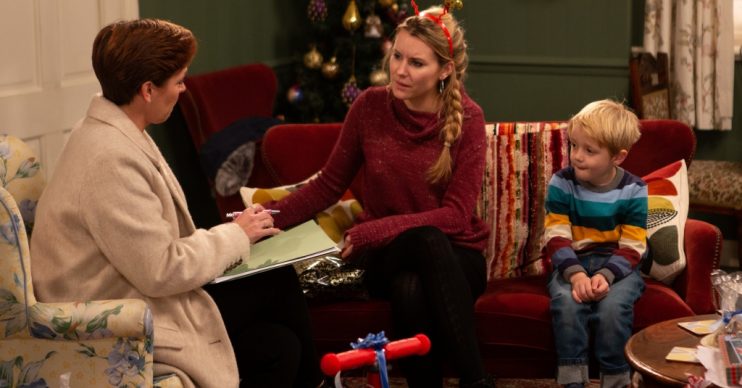