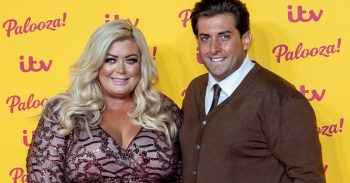 It was all toilet humour

Gemma Collins has confessed that boyfriend James ‘Arg’ Argent once soiled himself in her bed.

The TOWIE star revealed that the mishap took place when they were away together.

The 38-year-old shared the grim story while appearing on Celebrity Juice with Arg – much to his horror!

The couple took part in a game to put their relationship knowledge to the test and GC ended up sharing a little too much information.

Team captain Holly Willoughby asked her: “When and where did Arg last soil himself?”

Gem then said she had to be “honest” about 31-year-old Arg’s toilet troubles and claimed he loses control of his bowels “frequently”.

But a rather embarrassed Arg insisted the accident was down to drinking a lot of green tea!

“Remember on holiday when you had to stop for five minutes and hold it?” Gemma asked him.

She then added fuel to the fire when she claimed that Arg actually pooed in her bed!

She wrote her answer down and flashed it for all to see, but Arg swore that the substance she found in her bed was actually chocolate ice cream.

GC then told Celeb Juice’s Holly and Keith Lemon: “That’s true as well,” but she also confirmed that when she bent down to smell the “ice cream” she was convinced it was poo!

Read more: Gemma Collins and Arg prove their relationship is stronger than ever

But that’s not the only confession GC made on national television. She also spoke about her sex life with Arg.

She complained that the injury she sustained on Dancing On Ice in January is still affecting their bedroom antics.

Reflecting on the incident that saw her plunge  face first onto the ice, she explained: “It’s really affected our personal life because the knees are so bad that I can’t sort of do anything on them anymore.

“I’ve got to have cortisone injections. It’s really affected us in the bedroom.”

What do you think of Gemma’s confessions? Head over to our Facebook page @EntertainmentDailyFix and let us know.