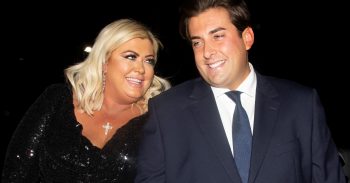 Reunited pair spill the beans on their lack of bedroom antics

Gemma Collins and her boyfriend James ‘Arg’ Argent have opened up about how their weight is affecting their love life.

The pair appear on this week’s Celebrity Juice and The Mirror revealed that viewers will see them speak openly about their sex life.

Blaming their recent rough patch on Arg’s weight gain and Gemma’s Dancing On Ice fall, which has caused an ongoing injury, the couple said their sex life isn’t what it used to be.

Speaking of the fall, Gemma told the show’s host Keith Lemon: “I was in agony.”

Read more: Gemma and Arg pack on the PDA

She added: “It’s really affected our personal life. The knees are so bad I can’t sort of do anything on them any more.”

Gemma concluded: “It’s really affected us in the bedroom.”

RuPaul’s Drag Race star Michelle Visage was also on the adult game show and had some advice for the pair.

Read more: Gemma and Arg pack on the PDA

Arg responded: “Yeah, but my belly gets in the way.”

Gemma’s other half has recently revealed plans to get back in the gym. After previously being inspired by Gemma to lose weight, Arg told The Sun: “I’m desperate to get back on track.”

He added: “I need to work on my fitness, but I find it so difficult. I need to get back in the gym and boxing again.”

Gemma and Arg recently returned from a sun-kissed break in Tenerife, with Gemma telling her Instagram followers: “Thank you @real_arg for spoiling me rotten as you always do.”

She added: “We really did have the best holiday I’m already missing it but the MEMORIES we made will last FOREVER.”

What do you think of Gemma and Arg’s frank bedroom admission? Head over to our Facebook page @EntertainmentDailyFix and let us know.