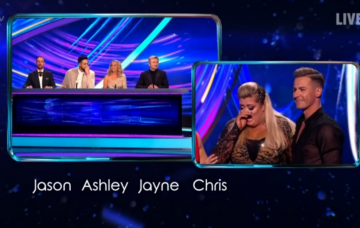 Towie star still gets her highest score of series

Gemma Collins was left in tears after taking a tumble during her live routine on tonight’s Dancing On Ice.

The Towie star tripped and crashed face first to the rink near the end of her performance to Celine Dion’s It’s All Coming Back To Me Now.

She was immediately helped to her feet by pro-partner Matt Evers before waving to the crowd to signal she was okay.

But just moments later as the judges gave their scores, Gemma’s highest of the series, she fought back tears as the shock of the fall kicked in.

Her feud with Jason Gardiner, which exploded in a live on-air row on last week’s show, was a distant memory as host Phillip Schofield consoled her and the panel focused on her performance.

Ashley Banjo told her: “I was gutted for you but you still got out what you put in, and that was your best skate.”

Jason said: “When you drop the ‘GC’ and you apply yourself, you improve. My only concern is if there is enough improvement and can you catch up with the celebrities who are well ahead of you?”

Fans gave a mixed reaction to Gemma’s tumble, with some saying it was the highlight of the series and others expressing sympathy for the star.

#doi God love Gemma. If she’d been a Twiglet, she could have really injured herself. Thank god for padding!

* Dancing On Ice is on ITV every Sunday.

What did you think of Gemma’s performance? Leave us a comment on our Facebook page @EntertainmentDailyFix and let us know what you think!