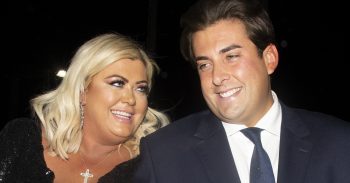 The pair have recently enjoyed a holiday in Tenerife

Gemma Collins and boyfriend James ‘Arg’ Argent packed on the PDA in a sweet video.

Dancing On Ice star Gemma, 38, filmed herself and Arg sharing a kiss while soaking up the sun on a boat during a recent holiday to Tenerife.

In the clip, Gemma asks Arg: “Has it been a nice day on the yacht, James?” as she kisses him.

The loved-up pair then kiss each other multiple times as Gemma says: “Why do we love each other so much?”

The pair then burst into laughter.

Gemma captioned the post: “Give someone LOVE and lots of kisses today @real_arg I LOVE YO … swipe across… THAT’S ENOUGH now.”

Earlier this month, Gemma hinted she’s teaming up with Arg for a new TV role – and it seems they are going to be getting rather physical!

The reality star revealed they are working on a new project on her Instagram Story, and she gave the game away with the outfits they were wearing.

The TOWIE pair were dressed in the unmistakable grey boiler suits worn by stars on The Crystal Maze Celebrity Special.

Gem flashed a peek of their grey suits as she filmed from behind the scenes of the show.

The channel 4 gameshow sees a group of celebs navigate their way through a series of tricky mental and physical tasks to win money for charity.

Read more: Brian McFadden predicts Gemma Collins will be a success as a singer

As they waited around for their slot, GC insisted that James was the one being a diva on set – before she complained that it was too “cold” as they got ready in a trailer.

“I can’t tell you how cold it is, where we are. Where’s the sun?” she told her fans from behind the camera.

She later panned the camera to 31-year-old James and the crystal maze emblem could be clearly seen on his all-in-one.

Leave us a comment on our Facebook page, @EntertainmentDailyFix and let us know what you think of this story.