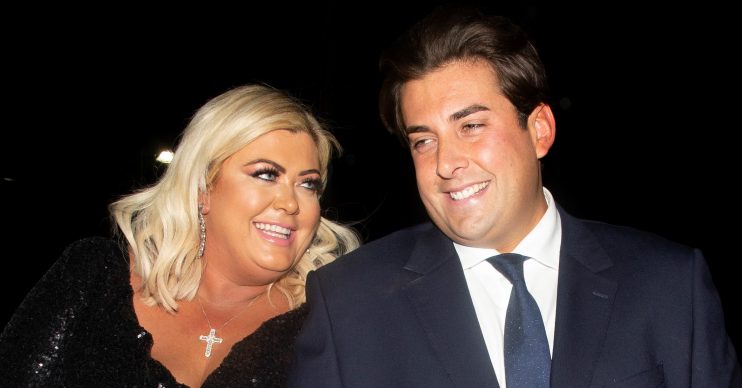 The pair have called it quits once again

Reality star Gemma Collins has put an end to her turbulent relationship with James Argent after he reportedly called her a “hippo” in a string of nasty text messages.

Following their split, Gemma, 39, exposed her on/off boyfriend on Instagram as she shared a series of text messages, which have since been deleted from her profile.

In one Arg reportedly compared her to the large, semi-aquatic mammal.

Read more: Gemma Collins shows off glowing tan as she enjoys holiday in the sun

Addressing her heartbreak, she wrote: “Hey guys as you can imagine I am absolutely heartbroken right now shocked totally in pain and can’t pretending I’m all smiles over the gram.

Gemma also shared a cryptic post about the ‘Top 10 Signs of Emotional Abuse In A Relationship’.

She captioned the picture: “To all who have suffered in lockdown or are suffering in general 💗 please please find your strength to walk away 💗 .

Read more: Katie Price thanks fans for support as son Harvey is ‘tested for coronavirus’

“There is a better life for you filled with love and respect 💗 and always remember the problem isn’t within you it’s within them 💗 walk away it’s never too late 💗 .

According to The Sun, Gemma was left “heartbroken” after Arg revealed he was relocating to Spain.

A source explained: “Gemma feels like she’s done everything she possibly can to help Arg but enough is enough.

“He said that he wants to stay in Spain for good which is worrying as he is known to have suffered relapses there in the past.

“Gemma was devastated by the conversation and decided to end their relationship entirely – she feels like she had no choice but to walk away.”

The star has since been supported by her legion of fans on Twitter, who begged her not to get back with her ex.

One said: “On a serious note @missgemcollins please don’t go back to @RealJamesArgent. He’s always treated you like utter [bleep]. You deserve so much better you amazing lady. @RealJamesArgent.”

@missgemcollins you deserve 1000 times better than him, keep going hun, your looking fab! Don’t ever let him get that candy again… #gemmacollins

Another commented: “After seeing the texts Gemma posted, Arg is living proof that you can shift all your weight and go on TV shows claiming to be a changed man but still be a grade A [bleep]!! Disgusting human being.”

A third raged: “@missgemcollins you deserve 1000 times better than him, keep going hun, your looking fab! Don’t ever let him get that candy again… #gemmacollins.”

The couple seemingly rekindled their romance this year after it was suggested Gemma had been visiting Arg 30 miles away during lockdown.

She also stuck by Arg throughout his battle with drugs and alcohol.

Speaking about her on a recent interview on This Morning, he said: “When I was deep into my addiction I would hate Gemma.

“She gave me some tough love for sure and she was hard on me but thank God she was.”

However, he went on to say that he was now incredibly grateful for his ex, as she ultimately saved his life.