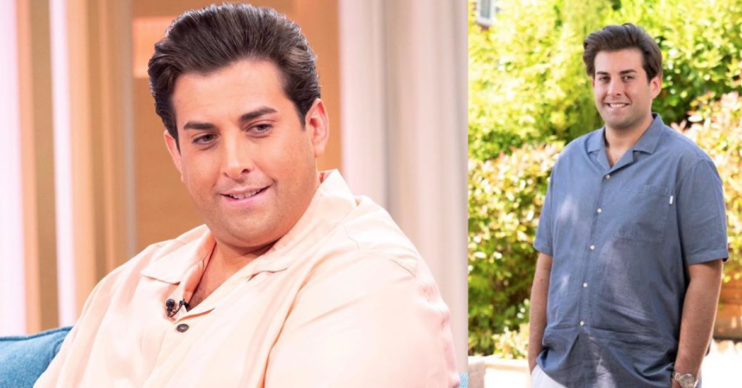 He's undergone quite the transformation

On Wednesday (May 27), Arg appeared on This Morning and told Ruth Langsford and Eamonn Holmes about his addiction battle.

Arg said that he feared he would die before his pal Mark Wright stepped in to send him to rehab in Thailand.

And, while there, James lost a remarkable five stone in weight.

Taking to Instagram, the reality TV star posted a before and after picture.

Firstly he thanked his followers for their “overwhelming” support.

Read more: Britain could be out of lockdown and “back to normal” by August

He also paid tribute to pal Mark, girlfriend Gemma Collins and the rest of his family and friends.

Arg said: “I’m so lucky to have family, friends and an amazing girlfriend that truly love and care about me.”

I was the biggest I’d ever been, I was 23 and a half stone, I hated myself. I was at an all-time low.

At his heaviest, Arg weighed 23 and a half stone.

“Love you boy. So proud of you,” Mark commented.

Mark’s cousin Elliott Wright added: “Love you mate, we all do, remember that. You look amazing and you should be proud you have got to this point looking back at those dark days. Always there for you, well done.”

Read more: The full list of shops, restaurants and businesses banned from reopening

Arg checked into rehab – which he revealed was paid for and organised by Mark – at the start of the year.

Following his return from rehab, Arg admitted he’s in the “early stages of recovery”.

And he revealed how he’s keeping both body and mind healthy.

Indeed, during lockdown, Arg has been seen pounding the pavements on a run, while wearing a top emblazoned with his girlfriend’s face.

Gemma too has decided to shape up.

She is currently in lockdown with her brother and his family and fans have been commenting on her new slender shape.