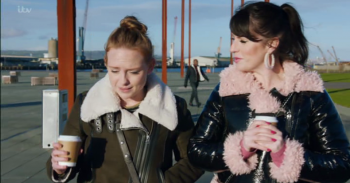 Far from it, in fact, the suspicious lot called Amy a “fraud”, an “imposter” and “a fake”.

While some viewers were happy to see the character return on Thursday (7 March), many just couldn’t get over the fact that she’d been recast.

Soap fans saw Kerry Wyatt finally track down her daughter in Belfast where she was on the run, and try to persuade her to return to the Dales.

But viewers weren’t having any of it, with one tweeting: “Emmerdale Amy’s obviously had cosmetic surgery as she is nothing like she used to be back in Emmerdale.

“And her voice is different too. So just who is she? An imposter. Arrest her for fakery.”

It's funny how a move to Belfast has given Amy a different hair and skin type. I'm surprised her mum recognised her! #Emmerdale

#Emmerdale Amy's obviously had cosmetic surgery as she is nothing like she used to be back in Emmerdale. And her voice is different too. So just who is she? An imposter. Arrest her for fakery 😡🧐

So has Amy had facial reconstruction on @emmerdale? I wish soaps wouldn't do that, it proper throws me. It's one down from looking at the camera, or breaking the forth wall or whatever it's called. #SoapLand #TV #Emmerdale

Who’s this fraud? Where’s Amy and her dreadlocks? #Emmerdale

Don't like this new Amy! No one will beat @ChelseaHP #Emmerdale

No sorry new Amy is not working for me #Emmerdale

“So has Amy had facial reconstruction on @emmerdale?” asked another. “I wish soaps wouldn’t do that, it proper throws me.”

Others laughed at the fact the police couldn’t possibly have caught Amy because of her changed face, and wondered how her own mother recognised her!

Some, however, applauded the ITV soap for “good recasting” saying that the two Amy’s are “really similar”.

The character was last seen in 2013, when Amy fled the village to live in Ireland, leaving mum Kerry to look after her grandson Kyle.

Amy got pregnant with Cain Dingle’s baby after they had sex in an attempt to make David Metcalfe jealous.