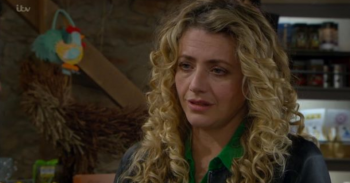 How low can she go?

Not only is she having an affair with her boyfriend’s stepson, she’s now duped poor, gullible David Metcalfe out of his life savings.

Last night (Tuesday April 23), Emmerdale fans were fuming as groomer teacher Maya tricked David into giving her all his money.

Viewers know she needs the cash to pay off Liv, who has discovered the truth about Maya’s affair with schoolboy Jacob Gallagher and is blackmailing her.

However, the duplicitous teacher conned David by saying she needs the funds to pay off the debts from her divorce!

After finding out about the sordid affair, Liv demanded £5,000 blackmail money from Maya to help pay for her brother Aaron’s surrogate.

Unable to raise the cash herself, however, Maya stooped to a new low – telling David she was desperate for funds to pay off money owed from her divorce.

Fans called out in horror as ridiculously gullible David offered to pay off her debts with his own hard-saved cash.

In an even sicker twist, Maya then made Jacob feel GUILTY for the situation.

Raging fans took to Twitter to vent their anger at the teacher, with one writing: “That Maya is a real piece of work, isn’t she?”

Another said: “Maya the horrible [bleep] blaming the boy she groomed for her situation. #Emmerdale.”

A third fumed: “Maya being ‘straight’ with David, now there’s a joke in itself #Emmerdale.”

Oh David, if only you knew the true Maya…🤭#Emmerdale

Maya the perv who has been grooming a schoolboy for months is calling anyone a conniving cow #Emmerdale pic.twitter.com/i02hJ1MmU7

@itvemmerdale_ Just catching up with last night’s #Emmerdale That #Maya is a real piece of work isn’t she?

“Maya’s seriously going to use David’s own savings to stop her paedophile relationship with his former stepson coming to light seriously?” seethed another. “Also she wants him to ‘trust her’? Not for much longer he won’t #Emmerdale.”

Spoilers tell us that David plans to PROPOSE to Maya during Thursday’s Big Night Out episode, however things don’t do according to plan… At all!

Do you have sympathy for David or are you frustrated by his naivety? Leave us a comment on our Facebook page @EntertainmentDailyFix and let us know what you think!