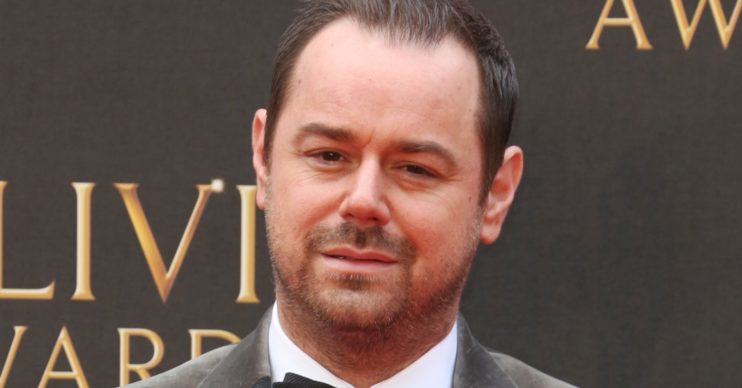 He spoke about his health on Sorted With The Dyers

The soap star, 43, compared his testicle to a “jacket potato” as he discussed his health on the podcast he hosts with daughter Dani.

After a conversation about his short-sightedness on Sorted With The Dyers, Danny said: “The other thing I’ve got to get done is my [bleep].

“I’ve got a massive [bleep], it’s called a hydrocele.

“Basically one of them is like a [bleeping] jacket potato… for real… it’s one big ball.”

Mick Carter actor likens penis to ‘slug on an apple’

He also quipped that, on cold days, his “winkle” looks like a “little slug laying on an apple”.

TV presenter Rylan Clark-Neal was on the podcast and quipped about wanting to see it.

Basically one of them is like a [bleeping] jacket potato… for real.

However at that, former Love Island star Dani said quickly: “Don’t get it out today.”

The NHS explains of the condition: “It is a fluid filled sack along the spermatic cord within the scrotum. Hydroceles can occur on one or both sides.

“Sometimes, and more commonly in older men, inflammation or trauma of the testis or epidymis can cause a hydrocele. Many occur for no obvious reason.

“A hydrocele results in a painless, swollen scrotum, on one or both sides, that feels like a water-filled balloon.”

It also explains that doctors diagnose the condition through examination, ultrasound or by transillumination, which involves using light.

‘Joy’ for Danny as he becomes grandfather

On Instagram, Danny – who plays EastEnders’ Mick Carter, revealed his joy as he posted a snap of Dani with her newborn son.

In the caption, the actor wrote: “So my baby had a baby. [Bleep] me we needed some joy this year.

“So proud of @danidyerxx. Cannot wait to meet the little beaut.”