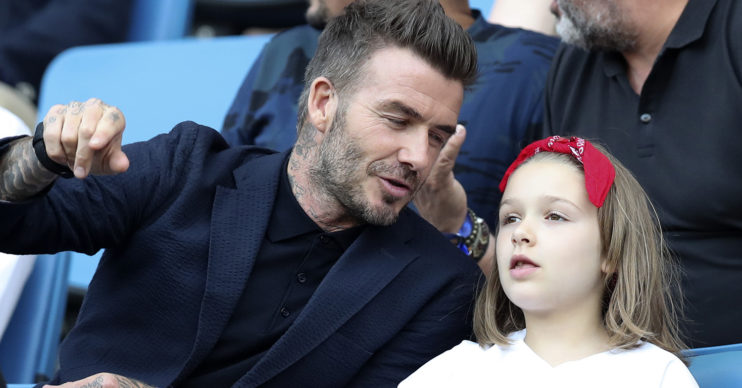 He told fans on Instagram about the thoughtful present

The Inter Miami CF owner, 45, showed off the thoughtful gift from his youngest child, eight on Instagram.

And his loyal fanbase were left just as impressed.

David explained how Harper had made them matching jumpers based on one of his favourite TV shows.

An ardent Friends fan, David looks chuffed to pieces with their matching ‘How You Doin’?’ sweaters.

Sharing with his some 63 million Instagram followers, he shared a very sweet father-daughter selfie.

His caption includes: “Happy Sunday … How You Doin? @friends.. Harper Seven knows how much I love Friends so surprised me with my hoodie this morning.”

His fans gushed at how sweet the gift was, with many saying they’d love to own it too.

‘I need this jumper!’

One user commented: “Yes! I need this jumper!!”

And a third posted: “Ah David. I think you might just be perfect. And oh gosh Harper looks like @brooklynbeckham.”

And a fourth fan joked: “I think we should invite Becks for friends trivia.”

Happy Sunday … How You Doin ? @friends.. Harper Seven knows how much I love Friends so surprised me with my hoodie this morning ♥️

Just days after Harper was born, David took to his official Facebook page to address the meaning behind both of his daughter’s names.

He explained that Harper is named after the author of the classic novel To Kill A Mockingbird, Harper Lee.

And Seven represents “spiritual perfection”. Fans had speculated she was named after his shirt number at Manchester United.

He wrote: “Victoria’s favourite book is To Kill A Mockingbird, it’s a very strong, passionate book and the author was Harper Lee, and that is where Harper came from.

“The main reason behind Seven was it symbolises spiritual perfection – the seven wonders of the world, the seven colours of the rainbow – and in many cultures it is a lucky number.

“We love the name and we love Harper Seven. We are very happy to have her in our lives and in our family, and it is an amazing time for our family right now.”